Rock to the Future: Helping students shine on and off stage 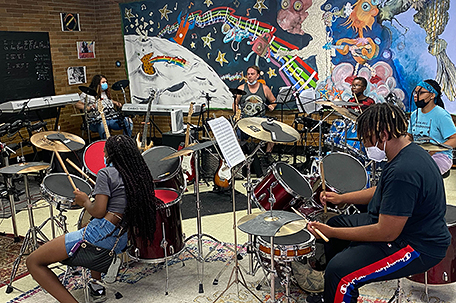 (Photos courtesy of Rock to the Future)

For two weeks, in two separate locations, dozens of Philly’s youth embark on a journey meant for Jimi Hendrix himself. Students pick up instruments with no prior knowledge or training, start bands with no prior history or connections, and form bonds with others in a safe space they wouldn’t otherwise know existed. This journey may not lead to the Rock and Roll Hall of Fame, but it is designed to give each student the confidence to perform on the world stage.

Rock To the Future is a program that was founded in 2010 as a volunteer organization to support positive youth development. Over the last 12 years, the program went from serving 13 students in the MusiCore after school program to serving more than 500 students between the MusiCore after school, mobile music and Summer Programs in 2020 and 2021. The program even sustained growth through the worst parts of the pandemic.

The two-week summer program takes place at Roosevelt Elementary School, in Germantown and in Kensington at Kensington High School. Students from 6th grade through 12th come from all across the city for the safe and constructive experience.

“We are making sure that we foster the community that we’re trying to promote here,” said Kaamilah Moore, the Germantown site director. She joined Rock To The Future in 2016, starting out as a volunteer. Moore says she was looking for an opportunity to serve the community she lived in and found the organization to be not just a creative outlet, but one that was welcoming to her and the students that benefit from it.

Ironically, the very program that serves as a young rockstar’s paradise is the same place they visit to block out the noise.

“We have students that come from all walks of life,” said Moore. ”I’ve heard from our students directly, that the environment that they’re coming from is often a place of aggression, where you fight first and ask questions later. We want to make sure that our students know that we might be in that environment but not of that environment.”

Teachers, volunteers and organizers work hard to create an atmosphere of acceptance that is set from the moment you walk in. They want children to feel that the program is a safe space in more than just lip service. I felt the warmth when I observed a room full of “bass players in training” working to strum the bassline of “My Girl.”

In another room nearly a dozen of tomorrow’s drummers worked to understand time signatures. They were learning how to read music and fully engaged while doing so. They were young, but this was no child’s play.

Rock to the Future focuses on zip codes within Philadelphia that are underserved in terms of after school programs and opportunities to learn music in school.

On a child’s very first day in the program, they choose an instrument (drums, piano, guitar and bass) and begin molding both their band and their brand for a major showcase toward the end of the summer. Not only do students learn how to play the instruments, but they learn marketing strategies and graphic design skills to promote their show as well. The value of the program has it trending upward in engagement and enrollment. In fact, this was the first year that the summer program had a waiting list. Organizers are excited about its growth year over year and remain committed to continuing their progress.

“We want to focus on retention and engagement strategies,” said Juliana Cala, Rock to the Future’s program director. “The goal is always to make sure children are satisfied and continue coming.”

When you’re serving hundreds of students, support must come in a variety of different methods in order to meet each child’s needs. That’s why “Rock” not only teaches music and life skills, but the program offers free breakfast and lunch as well as transportation vouchers. Students even have the opportunity to take the instruments home to practice on their own.

Saij Williams, a 13-year-old student in the program, plays the guitar in her band but has much bigger dreams.

“I like the program, and I like the music, but I want to be a lawyer when I grow up,” said Williams.

She’s not the only one with aspirations beyond the main stage. 12-year-old Amiyah Johnson wants to be a lawyer as well. In fact, a quick poll of many of the students at the Roosevelt Elementary location yielded results that showed a desire for higher education.

When students assimilate through the program and graduate high school, they are awarded laptops and scholarships to ease the cost of their continued learning. However, Rock to the Future does not just push students to obtain four year degrees. All routes of betterment including attending a trade school are celebrated. The program exists to help a young person focus on their future to achieve the best outcome.

Site director Kaamila Moore says the goal is much bigger than a baseline.

“We don’t necessarily want to create the next Prince or Jimi Hendrix, but it’s to have someone who can stand on their own two feet and shine in any environment”.

Moore says there are people that have come through the program and are now operating on major tours with artists. Some students have even come back to serve as teachers in the program. Moore says even if students are drawn to a musical profession, for every superstar you see on stage, there are thousands of careers behind the scenes that are still music adjacent.

Massai Walker is a 14-year-old in the program. He started playing guitar, then switched to the bass after he picked it up. But not only does he have his sights set on playing the piano next, but he wants to take music to the next level, but he’s not hoping for a hit record.

“I want to be a video game animator,” said Walker, “but I want to make soundtracks for the video games as well.”

Kaamila Moore says the music is just the starting point.

“Our students would say they love the opportunity to learn the instruments and take them home,” said Moore “but it really just motivates kids to be in our presence so we can motivate them and lift them to greatness.”

Rock to the Future plans to expand into West Philadelphia in the coming years as well as create their own full-time operational space. The program is also accepting of both volunteers and donations. If you would like to get involved, visit their website at https://rocktothefuture.org.