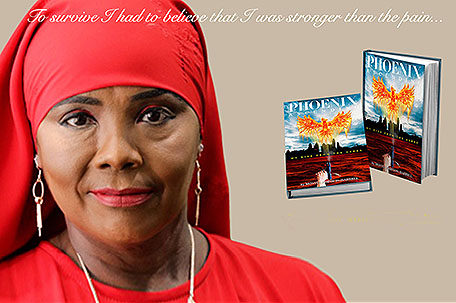 In her new book “Phoenix Ascending,” activist Movita Johnson-Harrell shares the story of a rose that grew from concrete.

For many of us, making sense of the things that happen to us in life, both good and bad, can be done by writing in a journal.

Throughout her life, activist Movita Johnson-Harrell has been writing in journals about what’s gone on in her life, a life that has included serving as a state representative, battling addiction, and mourning the deaths of several members of her family due to gun violence.

She didn’t necessarily do it for herself, she said.

“Somewhere in the back of my mind, I said, somebody is going to need to read this one day,” Johnson-Harrell said. “They’re going to need to see that I’ve been through all this and have survived because, to tell you the truth, I didn’t think that I was going to live this long.

So, when my brother was murdered in 1991, and I was still in an active crack addiction, I started writing this with just a composition book and an ink pen.”

Johnson-Harrell’s journals and the story they tell is the subject of her new book, “Phoenix Ascending.”

The book, which was 28 years in the making, looks at the author’s life and tells the story in a way that will allow readers to gain some lessons to use in their own lives.

When she began writing after the murder of her brother 28 years ago, Johnson-Harrell started with her earliest memories. She was looking for a way to process the various forms of trauma that led to her becoming addicted to drugs, she said.

She wanted to be out of her addiction, and writing helped, she said.

“It was kind of therapeutic for me,” she said.

While much of the book details Johnson-Harrell’s struggles — struggles that include the deaths of both of her sons, Charles and Dante’ — to gun violence, surviving that struggle in order to thrive is also a part of the book.

One of the stories she tells in the book is the story of her term in the Pennsylvania Legislature. Before becoming a legislator, Johnson-Harrell served in the District Attorney’s office. But even before that, she was a woman who understood the power of being a Muslim woman, wearing a hijab on the House floor, and being the voice of a community that often doesn’t have one, she said.

“It felt very empowering for me to be able to go up to Harrisburg, and not put on a mask and be my true authentic self, and fight for the same communities that

I grew up with, people who have suffered some of the same perils that I’ve suffered. And I think that was empowering for all of the communities I represent.”

It is this story of hope that she plans to share on the book tour that she’s doing in support of the book, Johnson-Harrell said.

“I’ve spent the better part of my life, literally the last 27 years of my recovery, trying to empower and inspire people,” she said. “And that’s what I want from this book. I’m doing two different tours. I’m doing a recovery tour, and I’m doing an empowerment tour.

And with the recovery tour, I’m going into therapeutic communities, I bought books to donate to people who are in rehab programs.

I just want to inspire people. I want to let people know that whatever this life throws at you.

To get your copy of “Phoenix Ascending”, go to: www.movitajohnsonharrell.com or Amazon.com.

Peter Ramsey, director of Rise of the Guardians The Rise of Ramsey!