“My Grandfather Would Have Shot Me”: A Black Woman Discovers Her Family’s Nazi Past 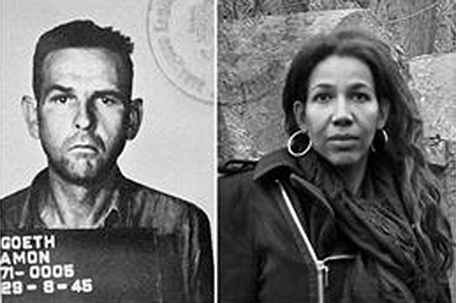 ABOVE PHOTO:  The author Jennifer Teege with a mugshot of her grandfather Amon Goeth.

by Jennifer Teege with Nikola Sellmair

“When Jennifer Teege, a German-Nigerian woman, happened to pluck a library book from the shelf…she discovered a horrifying fact: Her grandfather was Amon Goeth, the vicious Nazi commandant chillingly depicted in Schindler’s list—a man known and reviled the world over.

Although raised in an orphanage and eventually adopted, Jennifer had some contact with her biological mother and grandmother as a child. Yet neither revealed that her grandfather was the Nazi ‘Butcher of Plaszow,’ executed for crimes against humanity…

The more Teegs reads about Amon Goeth, the more certain she becomes: If her grandfather had met her—a black woman—he would have killed her.”

How do you think you’d react if you were Black and you inadvertently uncovered evidence that the mother who callously left you at an orphanage at less than a month-old was the daughter of an infamous Nazi who ran a concentration camp? That’s precisely what happened to Jennifer Teege who learned at 38 that her grandfather was Amon Goeth, a monster who not only ordered the extermination of thousands of Jews, but took a certain sadistic pleasure in participating in all the torture, maiming and killing.

While serving as warden of the Plaszow death camp in Poland, Goeth was very fond of shooting Jews for sport from the balcony of his home overlooking the prison yard. That’s just one example of the numerous atrocities recreated in Schindler’s List, the Academy Award-winning Best Picture where his character was played by Ralph Fiennes in a chilling, Oscar-nominated performance.

Understandably, Teege became severely depressed upon unearthing her genealogy, especially since she’s of African-German extraction, being the product of a brief relationship between her mother and a Nigerian. Among other things, she found out that her white supremacist forebear was so proud of his mass murder of people he considered subhuman, that his last words before his death by hanging were a defiant “Heil Hitler!”

So, Teege’s emotional tailspin made sense seeing how her bubble was burst, given how orphans are more inclined to fantasize that they’re descended from royalty than the scum of the Earth. Now, how was she to square having the blood of an inveterate anti-Semite coursing through her veins when she was adopted and raised by a loving couple who had encouraged her to speak fluent Hebrew and get a college degree from Tel Aviv University in Israel.

My Grandfather Would Have Shot Me: A Black Woman Discovers Her Family’s Nazi Past represents the culmination of a bittersweet quest for closure uncovering some of the most disgusting skeletons imaginable. In fascinating fashion, the author recounts her two-year, intercontinental trek during which she both confronted her long-estranged, biological mother and revisited the concentration camp and Jewish ghetto where her despicable granddad did his dirty work.

Yes, he must be spinning in his grave or perhaps more likely rotating on a spit in Hell about his granddaughter’s skin color, but let’s all give thanks that Jennifer in spite of his genes turned out to be a rather respectable apple that fell far from one very gnarly family tree.

To see a book trailer for My Grandfather Would Have Shot Me: https://www.youtube.com/watch?v=F6o3S-3Xnz4&feature=youtu.be

To order a copy of My Grandfather Would Have Shot Me, visit: http://www.amazon.com/exec/obidos/ASIN/1615192530/ref%3dnosim/thslfofire-20