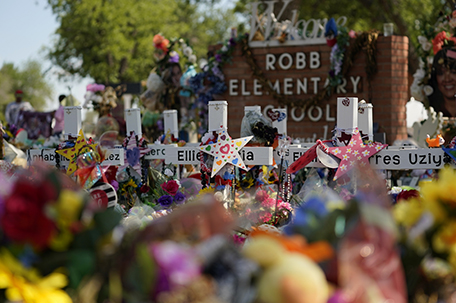 ABOVE PHOTO: Crosses, flowers and other memorabilia form a make-shift memorial for the victims of the shootings at Robb Elementary school in Uvalde, Texas, Sunday, July 10, 2022. At least $14 million in donations has been raised in private and corporate donations for the families affected by the May 24 shooting, but creating a plan to ensure that the funds are distributed equitably and transparently takes time, usually months. (AP Photo/Eric Gay)

HARRISBURG, Pa. — Amid a growing population of youth experiencing mental health crises, as well as another spate of mass shootings around the country, Pennsylvania lawmakers are prioritizing mental health services in this year’s budget by approving a first-time line item of $100 million for in-school support.

Invoking the recent tragedies in Texas and Illinois, Rep. Stan Saylor (R-York) said that through the funding, the state will try to tie together mental health and safety and security “so there are not people who fall through the cracks.”

In addition, the state’s Safety and Security fund, which was established in 2018 to improve physical school safety after the high school shooting in Parkland, Florida, will also receive $100 million.

The funds have historically been used for upgrading security — including adding cameras, safe entrances and personnel to school buildings.

For educators, addressing mental health is necessary to ensuring children are in a good place to learn, said John Callahan, chief advocacy officer for the Pennsylvania School Boards Association.

The funding from the state will help schools address mental health proactively and preventatively, as a way to engage students before it rises to the level of a crisis.

Callahan said that school districts have been addressing mental health needs in various ways, including increasing the number of school counselors and school psychologists, which can be pricey with salary and benefits.

Others rely on contracting out those services, including one district that is using a telephone service to pro

Many schools districts, he said, also work closely with their counties’ behavioral health services. But with strain placed on staffing at the county level, service wait times can stretch to three weeks.

The mobile crisis unit in Bucks County, for example, was “gutted over the course of the pandemic,” and operating at significantly lower capacity, according to Donna Duffy-Bell, administrator of the Bucks County Behavioral Health/Development Programs.

“I’m sure the schools, as well as the general community, felt the impact of that limited capacity,” she said.

In 2021, youth crisis hotlines, mobile crisis response teams and walk-in crisis centers statewide all saw an increase in the number of people seeking care over the previous year, according to data from the Department of Human Services.

Furthermore, 40% of Pennsylvania students in grades six, eight, 10 and 12 surveyed in 2021 said they felt sad or depressed most days over the past year — a slight increase over 38% of students who were surveyed in 2017 and 2019.

The data, collected by the state agencies biennially from 1,908 eligible schools, reflects what officials say is a growing trend of increased mental health issues among Pennsylvania youth.

“We know this is going to be an ongoing collective effort,” said Monica Stefanik, children’s services director for Bucks County. “We’re continuing to see an increase and want to pull together as a community to support youth on many levels. That will help to improve mental health over time if we’re all working together.”