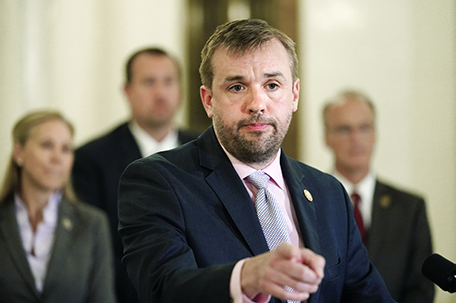 HARRISBURG, Pa. — A Pennsylvania judge heard conflicting descriptions of the state’s education funding as a trial began last Friday in a lawsuit designed to compel lawmakers to funnel more money to schools in lower income areas.

A lawyer for the districts, parents and organizations that sued argued current state subsidies are insufficient in areas with lower property values and income, running afoul of the state constitution’s mandate of a thorough system of public education.

“This isn’t a case about numbers,’’ attorney Katrina Robson told Commonwealth Court Judge Renee Cohn Jubelirer. “It’s a case about people. It’s about children struggling to overcome circumstances that they can’t control, children who see the resources available at other schools and not available at theirs.’’

Robson warned the judge that legislative Republican leaders will argue the state’s funding of public education compares favorably to other states.

“That ranking is based on an average,” Robson told the judge. “And that average hides what the Pennsylvania Department of Education itself described as one of the largest gaps of any state in the country in per-child spending between the commonwealth’s poorest and wealthiest districts.”

The case’s central issue is a pattern of wide disparities in spending among the state’s 500 districts and the comparatively low percentage of K-12 education that is paid for by the state government.

The plaintiffs are six districts, several parents, the state conference of the NAACP and the Pennsylvania Association of Rural and Small Schools. They sued the governor, state education secretary, the Department of Education, the state Board of Education and the top-ranking Republican leaders in the state House and Senate.

The lawsuit does not request a specific amount of money to be spent on K-12 education, but rather a declaration that the existing system violates a state constitutional requirement that Pennsylvania provide a “thorough and efficient system” of public education and that the system discriminates against children in lower-income areas.

Patrick Northen, a lawyer for House Speaker Bryan Cutler (R-Lancaster), a defendant in the case, argued the Legislature has been funding education in good faith, noting state support has grown by $2 billion annually over the seven years since the lawsuit was filed in 2014.

Pennsylvania ranks near the top nationally in spending per pupil on elementary and secondary education, Northen said, with education spending now at about $13.9 billion this year.

“Even the lowest-spending districts in Pennsylvania spend significant funds to educate their children,” he argued, adding that “the narrative that Pennsylvania drastically underfunds education is simply not accurate.”

He called much of the petitioners’ case a public policy dispute cloaked in a constitutional argument.

“Not only is Pennsylvania’s public school system not constitutionally deficient, it’s actually quite a good system — there’s quite a bit to be proud of,’’ Northen said.

The trial is being streamed online and is expected to last into January. No matter which side rules, an appeal to the state Supreme Court is likely.