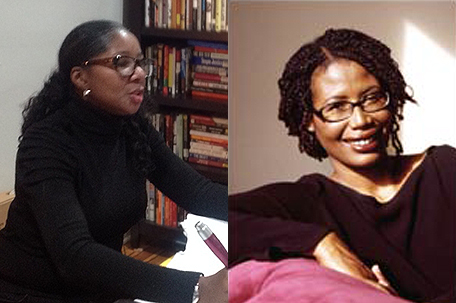 One of the questions I’m asked most often when out on the lecture circuit or out on a book tour is: What advice would you give for aspiring authors?

My answer is always the same. Join a writing group.

It’s simply a group of writers who get together on a regular basis to give each other critiques, advice, and support. And for someone who’s just starting out, it’s the best thing you can do to get your literary career on the right track.

“It was a tremendously helpful experience for me,” said bestselling author Diane McKinney-Whetstone. “Some writers don’t like to have the writing read, but I loved the feedback I was given.”

McKinney-Whetstone was a member of the Rittenhouse Writers’ Group when penning her first novel, “Tumbling”, which was published in 1999 to critical acclaim.

“I was stealing time from everything – stealing time from my life to work on this novel, and I had no idea if I was doing anything right,” said McKinney, who has since published four other books with Harper-Collins.  “It wasn’t until I joined the group that I finally felt validated. And the criticism was helpful.”

McKinney-Whetstone – who is polishing up a new novel due out late next summer, – is one of the most successful novelists to come out The Rittenhouse Writers’ Group, which has been around since 1988. The writing group is actually a series of quarterly writing workshops, and costs more than $500 per quarter.

But a writing group doesn’t have to be pricey to be good. In fact, most writing groups are free and worthwhile.

Writing books is a solitary task and you can worry for hours, days or weeks, about whether or not you’ve described something in just the right way. You don’t want to find out when you finally submit your manuscript to a literary agent or a publisher that you did, indeed, get it wrong because that one little mistake may not be so little in their eyes…and might lead to a rejected manuscript.

“According to my sister – the only one I showed what I knew was soon-to-be a New York Times bestselling novel – I was the greatest writer who ever set pen to paper,” said Veronica Axelrod, a receptionist from North Philadelphia. “But when I started sending it out to literary agents, all I got were rejection letters.”

A despondent Axelrod was browsing in a bookstore and saw a posting from a woman looking for writers interested in forming a writing group. She jotted down the number, gave the woman a call, and the following month she was a member of The Love of Writing Writers’ Group.

“It wasn’t until I joined that I found out that my book was constantly changing points of view from first-person to third-person. A big no-no,” Axelrod said with a laugh. “Looking back at that manuscript now, I’m actually embarrassed.”

Love of Writing – which has no membership dues – has seven members and meets at a different member’s home each month. None of the writers have had a book published yet, but four of them have had short stories published in literary magazines.

Theresa Brunson, a Philadelphia attorney, had been working on her novel, “The Get Money Clique”, for years in private, never showing it to anyone. It wasn’t until she attended a writing workshop that she realized that her masterpiece had a big problem.

A few months later, Brunson joined the Eveningstar Writers’ Group. “The Get Money Clique” was trimmed down to a manageable 98,000 words, and she’s received interest from two different major publishers.

“I love the camaraderie that a writing group offers, and the feedback you get from the different personalities in the group,” Brunson said. “It built up my writing skills, but it built my confidence, too.”

Eveningstar, which has no membership dues, was created in 1999 by a group of four women, none of whom had ever published a book. Since its creation, five members have had novels published by major publishers, and two more have self-published their books. Members and past members include the late Leslie Esdaile Banks, Hilary Beard, Jenice Armstrong, Mister Mann Frisby, Fiona Harewood, Akanke Tyra Washington, and, ahem, Karen E. Quinones Miller.

Most writing groups meet once a month, but Eveningstar meets weekly. Members submit up to 20-pages each Sunday, and then meet on Tuesday evenings at a member’s home to have their submissions critiqued.

The good thing about this is everyone’s work gets feedback, and suggestions on next steps, every week. The bad thing is, meetings sometimes last up to five hours.

It’s grueling, but it seems to work. At least it does according to Sharai Robin, who recently signed a two-book contract with Strebor Books, an imprint of Simon & Schuster.

“Meeting weekly keeps me writing since I have to submit something every week,” said Robin, whose book “Candace Reign” will be published next fall. “Eveningstar keeps me accountable, and it keeps me motivated.”

Not all writing groups meet in person. There are a number of groups whose members have never met face-to-face, but get together over the Internet to share and critique each other’s works.

Jennifer Coissiere, author of the self-published novel, “Crossing Over”, has been a member of Snaps 1000 Words for a little over a year. But although she and her fellow members – Shonell Bacon, PR Burson, Makasha Dorsey – all published or self-published novels, they only use their writing group to critique each other’s short stories and essays.

“Someone had an idea to write a 1,000 word stories inspired by a picture, and that’s how the group started,” explained Coissiere, though the members do offer each other encouragement and advice on their individual books.

Coissiere’s group has a website, www.snaps1000words.com; Eveningstar Writers’ Group can be found on Facebook; and the website for the Rittenhouse Writers’ Group www.rittenhousewritersgroup.com. The Love of Writing Writers’ Group has no Internet presence, and is not currently accepting new members.

So what kind of writing group should you join? It depends on what kind of group fits your needs. Some people prefer groups that meet monthly because of busy schedules. Others prefer weekly groups because it keeps them motivated to write on a daily basis.

Not all writing groups critique all genres. If you’re interested in writing a memoir, make sure that the group you’re considering joining is interested in more than fiction.

My advice would be to ask if you can sit in a couple of meeting to see if you can actually handle the critiques the members offer. And don’t ever join a group where the members are cruel with their critiques, or make them personal. The rule is it’s the work that is to be critiqued – not the author.