Hi! My Name Is Loco and I Am a Racist 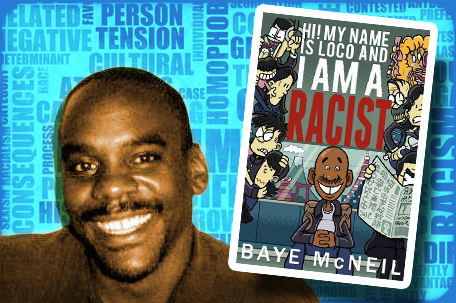 
“Hi! My name is Loco… I’m a native New Yorker, born and raised in Brooklyn. I currently live in Yokohama, Japan, where I put my English degree in
English to use teaching junior high school kids…


My hobbies are reading, watching movies, taking pictures of trains and stations, social networking and playing basketball… but my passion is
writing… And, oh yeah, I’m a racist.


[This] book is a selection of stories and reflections… Initially, I dismissed the idea… But as I wrote my way down Memory Lane, I noticed that
there was a racial thread that had run through my life from childhood until the present; that race had not only played a significant role in my
upbringing, but a traumatic one…

And that it might, indeed, make for an interesting book.”

Baye “Loco” McNeil is an African-American who took a most unorthodox path to discovering, confronting and eradicating the racism he found within himself.
Born in Bed-Stuy, Brooklyn, he was raised by parents with a Pan-African ideology, which led to the lad’s joining a cult as a teenager which preached black
superiority.

But after serving in the U.S. Army and earning a B.A. at Long Island University, Baye ventured to Japan where he would teach English for 8 years. And in
the Land of the Rising Sun, he found himself subjected to a vicious brand of bigotry that made him feel like a social pariah.

For instance, none of the locals would sit next to him whenever he rode the subway, even if the car was crowded. In a chapter entitled “An Empty Seat on a
Crowded Train” he recounts how an overprotective mother had hissed “Abunai!” (Japanese for “dangerous”) while yanking her 4 year-old daughter back to her
feet rather than allow the child to spend one second in the vicinity of a “gaijin” (“foreigner”) with dark skin, thereby indoctrinating the impressionable
young girl in the ways of discrimination at an early age.

Such routine displays of contempt on the part of fellow commuters day-in and day-out left Baye in a helpless state of “impotent hate” as if these strangers
were spitting in his face. No matter how much he tried to ignore it, or play it down as merely the consequence of a homogenous culture, it still bothered
him because it was clear that white Americans were being treated very differently.

He knew that the Japanese had bought into a bunch of stereotypes about black people which allowed them to think things like: “We don’t like you. We don’t
trust you. We think you’re a bad person, a pitiful person, an inferior human lacking morality. You steal. You habitually womanize and rape. You commit
violent acts against innocent people like us as a matter of course.”

What is surprising is that Baye wasn’t embittered by all the years of relentless ostracism, but rather he came to see the empty subway seat beside him as a
gift. For, through introspection, he realized that he had to work on his own prejudices about whites, Asians and others, and he evolved to the point where
today he takes on racism of any form every time he encounters it.

A really remarkable and thought-provoking memoir about a sensitive soul’s most unlikely route to a life-changing epiphany about the true meaning of racial
tolerance.