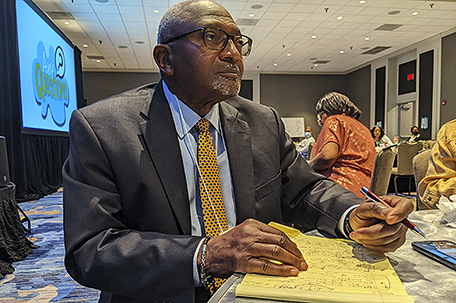 New Orleans — Both joy and frustration are in the air in New Orleans at the HBCU Climate Change Conference last week as environmental and climate advocates and researchers from around the United States press for urgent climate action and pollution cleanup in poor communities and communities of color.

The conference featured top officials and key advisors in the Biden administration, environmental and climate justice advocates from around the southeastern United States and faculty and students from the nation’s historically Black colleges and universities sharing their research.

It was the conference’s eighth convening and the first since 2019, due to the coronavirus pandemic.

Since then, people concerned with climate and environmental justice have moved into positions of power in the Biden administration, which created the first ever White House Environmental Justice Advisory Council and made strong pledges to clean up pollution and take climate action in disadvantaged communities. The Bezos Earth Fund and other new philanthropy is channeling money to environmental and climate justice groups.

But they and others in attendance also expressed disappointment with the lack of progress on actual pollution cleanup and said climate change now adds new damage in disadvantaged communities, to say nothing of the need to keep that damage from happening in the first place.

”We find ourselves fighting old fights, fights (we thought) we won. And now we’re fighting them all over again. And that’s why we need you young people. This is your fight moving forward,” Wright said.

This look back was amplified since one of the major themes of this year’s conference was reflection on the 50 years since the passage of the Clean Water Act in 1972 and the creation of the Environmental Protection Agency two years earlier.

Some attendees have been working to clean the water and air in their communities for two and even three generations. Pioneers said there is greater awareness and attention paid to issues like water, air, renewable energy, food access and flood protection for their communities, but they’ve seen little action on the ground on those issues.

Wright said at a community forum to kick off the conference on Wednesday night that when she began doing environmental justice work back in 1990, there were 132 petrochemical facilities along the 85-mile corridor from New Orleans to Baton Rouge known by some as Cancer Alley. Now there are two dozen more.

“We live in a state that for years abdicated its environmental protection obligations” with respect to the chemical manufacturing industry, she said.

The HBCU Climate Change Conference is also traditionally a venue for local organizations to share their data and young researchers to present their studies. Major themes in that research this year were tracking air pollution in St. James and St. John parishes in Louisiana, as well as Houston; building flood protection in the port cities of Gulfport, Mississippi and New Orleans, and measuring the cumulative impact of pollution on environmental health in communities of color across the United States.

Reggie Sylvestine, a member of the Alabama–Coushatta tribe in Texas who works in fire prevention and management, was at the conference for the first time and said what he learned was eye-opening.

“I’m learning that all of the impacts are mainly on (other) minority communities,” Sylestine said. “And we’re being left out from getting the help that we need to alleviate these problems.”

Another first-time attendee, Karis Thomas, a psychology student at Howard University, said she’s been inspired to take on a leadership role by watching other students at the conference and seeing the research they’re taking on.

“What I’ve really gleaned from this conference is the student activism and seeing what’s new that’s coming in terms of taking responsibility” in a way that doesn’t rely on government or corporate support, she said. “Because we’ve seen that this work takes decades, it takes years, and we don’t have years.”