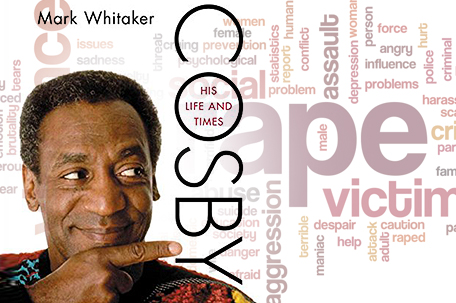 The package arrived last Wednesday – November 12 — and I opened it to see the book I had requested from Harper Collins – Cosby: His Life and Times. When I called the publisher, the day before, the accusations of rape against Bill Cosby had just begun to surface. Old accusations, that had been hurled and heard before.

But by the next day, when I was actually holding the book in my hand, a full media storm was in force. The Washington Post had published an op-ed written by Barbara Bowman, an actress who knew Cosby in the 1980s. She stated that Cosby drugged and raped her. The online article received more than 1 million views.

I quickly flipped to the index of the 532-page book, to see if Bowman was referenced in the book. She was not. But, okay, the woman had not filed charges, although there were allegations – and decades after the alleged event.

Nor was Joan Tarshis, an actress, who said she was raped – twice — by Cosby in 1969 when they were both working for the Universal Studios, named in the book. She told her story to the Hollywood Press. But, again, still she pressed no charges against Cosby back then. So, yeah, I could see why there might not be mention of her.

I then looked to see if he referenced Janice Dickinson, the well-known super model, who now alleges that Cosby raped her back in 1970.  Not there.

But surely Whitaker had mentioned Andrea Constand. She was the former Temple University assistant coach who not only accused Cosby of rape, but did file charges against him in 2005. She alleged that she was at Cosby’s home in Cheltenham, and he gave her a pill to “ease my anxiety,” along with a glass of wine. She said then she felt drowsy, and the next thing she knew Cosby was sexually assaulting her, and she was helpless to stop him.

Cosby’s lawyer called the charges preposterous at the time, but when California attorney Tamara Green heard about Constand’s accusations she went on NBC’s Today Show, to say that she had been sexually assaulted by Cosby in the 1970s after he gave her wine and a pill. She said that although she didn’t come forward earlier, since hearing that he’d done it again, she felt obligated to do so, saying: “Even two are too many.”

Bruce Castor, then Montgomery County District Attorney, declined to begin a prosecution against Cosby on Constand’s charges, saying that there was not enough evidence.

But Constand would not go away quietly. In March 2005 she filed a civil lawsuit against Cosby, which stated that there were 12 other women who would testify that they, too, had been assaulted by Cosby. Green was one of the women willing to testify; another was identified by the Philadelphia Daily News as Beth Ferrier, who said that she was drugged and sexually assaulted by Cosby in Denver in the 1980s.

In November 2006, Cosby and Constand settle out of court for an undisclosed amount, which means that none of the women willing to testify on Constand’s behalf would be heard in court. This prompted Barbara Bowman, another one of the women who Constand would have called to the stand, to come forward and tell People Magazine that Cosby had drugged and sexually assaulted her in the 1970s.

But none of this was in the Cosby book, which was written by Mark Whitaker, an editor for Newsweek Magazine, which I found interesting, since Newsweek had earlier published a story in which Tamara Green talked about seeing Cosby in Las Vegas, and running after him yelling, “liar” and “rapist.” Perhaps it was because Cosby cooperated with Whitaker for the book, which instantly hit the New York Times seller’s list.

Things quieted down for a while, until comedian Hannibal Buress did a standup show here in Philadelphia, Cosby’s hometown, in October and made reference to the sexual allegations against him.

“Bill Cosby has the f—ing smuggest old black man public persona that I hate,” Buress said during his performance. “He just gets on TV – ‘Pull your pants up, black people. I was on TV in the ’80s. I can talk down to you because I had a successful sitcom.’ Yeah, but you raped women, Bill Cosby. So, brings you down a couple notches.”

Buress goes on to tell his laughing audience: “I’ve done this bit on stage, and people don’t believe me. People think I’m making it up. If you didn’t know about it, when you leave here, Google ‘Bill Cosby rape.’ It’s not funny.”

Well, someone must have finally taken Buress seriously, because a taping of his act was put on YouTube, and quickly went viral.

Whitaker’s biography on Cosby’ was published in September, a month before Buress shot the rape allegations onto headlines, but Whitaker didn’t need the comedian to remind him of them. He just chose to ignore them.

When asked why he hadn’t mentioned any of numerous rape allegations – and not even Constand’s civil suit which Cosby had settled out of court – Whitaker told the press: “In these cases, there were no definitive court findings, there were no independent witnesses, and I just felt, at the end of the day, all I would be doing would be, ‘These people say this, Cosby denies this.’ And not only as a reporter but his biographer, if people asked me, ‘What is the truth? What do you think?’ I would be in the position of saying, ‘I don’t know,’ and I just felt uncomfortable.”

Yeah, uh, and I, uh, feel uncomfortable with Whitaker’s answer.

I’m a veteran reporter myself, and while I would waiver about writing about the rape allegations that came in decades after the fact (not to say I would or wouldn’t, but I would waiver), I would have – without a doubt – written about Cosby settling that lawsuit with Constand.

“I’m from South Philly, and I love and respect Bill Cosby, especially because of all he’s done for young black men, and the black community,” said John Munson, 57, an emergency medical technician. “But, still when something keeps coming back, it seems like some things must be true. I don’t want to look at like that, but it’s hard not to. “

Greg McKinley, a member of the organization Men United for a Better Philadelphia said he’s waiting on proof, but admits he has concerns about the validity of the accusations. “Anything is possible, but I find it strange that all these allegations are being made by white women. It It’s just opens a whole subject of a type of attack that has historical precedent.”

McKinley, who lives in West Philadelphia, also said the fact that these accusations are being made long after the statute of limitations have expired also seems suspect to him.  ”Let’s face it, this is a man under more scrutiny as an individual than the Catholic Church as an institution.

But Maisha Ongoza, a longtime community activist who also worked as a social worker, said she believed Andrea Constand was assaulted, and also believes the other allegations made by the other women are true.

“I’ve worked with people who were sexually assaulted, and I’ve done a lot of research on them. They don’t always come forward immediately…” said Ongoza who recently retired as coordinator of the Say Yes to Education, Bryant Chapter. “I’ve always believed he was a serial sexual molester, so these allegations do not surprise me in the least.”

Ongoza adds that it may be too late because of the statute of limitations for it the cases to be tried in a criminal court but Cosby is now, deservedly being, “tried in the court of public opinion.”

Forty-year-old Terry McIntyre said she believes in “innocent until proven guilty,” but says it’s not to believe something happened with the large number of women who have come forward, and basically telling the same story.

“But a lot of people looked up to this man, especially kids growing up watching the Cosby Shows,” said McIntyre,  “And a lot of people are acting like we’re now talking about Dr. Huxtable, and not Bill Cosby the man.”

As a result of the recent uproar, Netflix has canceled a special on Bill Cosby celebrating his 77th birthday, and NBC has cancelled an upcoming pilot for a series in which Cosby would have starred as a patriarch of a three-generation family. TV Land even went as far as canceling the reruns they’ve been showing The Cosby Show – the comedy series that first made the star a household name.

Interestingly, Bruce Castor, the district attorney who decided not to press the charges against Cosby in the Constand case hinted, after he left office, that he did believe Constand, and that detectives who interviewed the star felt that he was being evasive.

Castor, who now serves on the Montgomery County Board of Commissioners, seems relieved that the Cosby allegations is once again in the news.

“Now I can say I thought he did it,” Castor told the media Wednesday. “But back then, I would have been accused of tainting the jury that was going to hear the civil case.”

As for me, I’ve decided not to review the book.

Not because I believe Cosby is guilty, but because I’m uncomfortable.