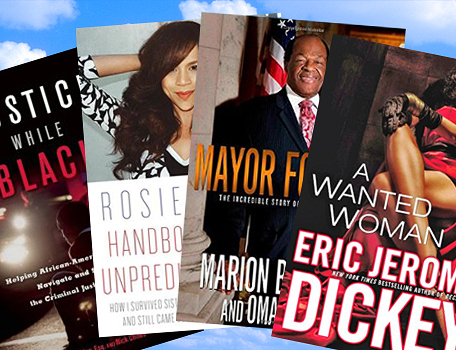 Okay, folks… it’s time to exercise your right to vote!

Not for some politician who you can only hope will actually fulfill promises made on the campaign trail, but for a book you’ve read and loved this past year. A book you think deserves an award.

But there’s a catch. You must be an NAACP member in order to cast a ballot for the 46th Annual NAACP Image Awards.

The Image Awards were established in 1967 to celebrate the achievements of people of color in movies, television, music and literature; accomplishments largely ignored by White America.

The percentage is a little higher for the Emmys and Grammys, but pretty dismal — less than two percent — for Broadway’s Tony Award.

The NAACP Image Awards have 31 competitive categories, eight of which are for excellence in literature. And since this is The Literary Lounge, those are the categories being covered here.

Here are the nominees…

The nomination for ‘Momma: Gone’ – a wonderful story about a young girl’s struggle with losing her mother to breast cancer – is particularly pleasing to Victoria Christopher Murray, co-founder of Brown Girl Books, since her publishing house has been in business less than a year.

“We want to be known as the best in books, and readers are taking notice,” said Murray.  “We take this quality thing seriously, and being nominated shows us we’re on the right track.”

‘Just Mercy: A Story of Justice and Redemption’, Bryan Stevenson (Spiegel and Grau)

‘The Bill of the Century: The Epic Battle for the Civil Rights Act’, Clay Risen (Bloomsbury Press)

‘Who We Be: The Colorization of America’, Jeff Chang (St. Martin’s Press)

‘The 16th Minute of Fame: An Insider’s Guide for Maintaining Success Beyond 15 Minutes of Fame’, Darrell Miller (Dunham Books)

“I feel honored and thrilled,” said Smith, author of Forty Acres, an enthralling thriller challenging a black attorney’s true feelings about slavery. “When I was a kid growing up in the South Bronx, because I was into writing and filmmaking, my friends would say things like, ‘Dwayne isn’t black.’ I guess my Image Award nomination proves them wrong.”

‘Handbook for an Unpredictable Life: How I Survived Sister Renata and My Crazy Mother, and Still Came Out Smiling (with Great Hair)’, Rosie Perez (Crown Archetype)

“I know Marion (Barry) is very proud right now,” said New York Times bestselling author (and Philadelphia native), Tyree. “It was a tremendous honor to have been able to document the life of story of a true bold, courageous, charismatic and caring man for the people.”

Tyree added that it was the late Civil Rights leader’s wish that his story be made into a movie . . . starring Jamie Foxx, no less!

‘Dork Diaries 8: Tales From a Note-So-Happily Ever After’, Rachel Renee Russell with Nikki Russell and Erin Russell (Simon & Schuster)

‘Because They Marched: The People’s Campaign for Voting Rights That Changed America’, Russell Freedman (Holiday House)

You have until Jan. 21 to go to http://www.naacpimageawards.net and cast your vote for your favorite book/author. But, remember, only NAACP members are eligible to vote. Bet you wish you remembered to pay your dues, now!

The 46th Annual NAACP Image Awards will be broadcast on Friday, Feb. 6 on TV-One.