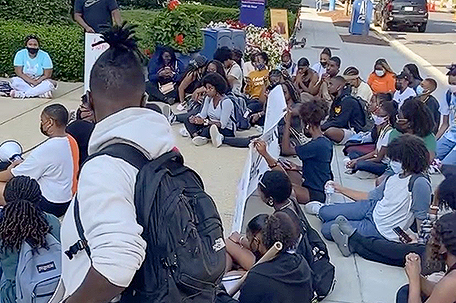 ABOVE PHOTO: Howard University students, saying they are fed up with “uninhabitable living conditions”, are taking to the sidewalks in protest. (Photo/Trevon Patterson –Trice Edney News Wire)

The student takeover of Howard University’s Armour J. Blackburn Building has entered its fourth week with no end in sight.

Currently, 150 students are occupying Blackburn demanding that President Wayne A. I. Frederick, school administrators and the Board of Trustees accede to four demands. Yet so far, Frederick, the HU legal counsel and Dr. Cynthia Evers, vice president of student affairs, has opted to play hardball by refusing to negotiate with the protestors.

Student leaders who spoke at an emergency student town hall meeting last Sunday night described mold growing on the walls and other parts of dorm rooms, leaking water, an infestation of rats and roaches, a housing shortage that has left students scrambling to find shelter, and demands that Frederick and the board reverse their recent decision to remove students, faculty, and alumni from the board.

“Three thousand students moved into moldy dorms. What type of university puts you in a chokehold and says that’s what you get?” asked Channing Hill, president of the HU NAACP. “It’s been 19 days of protests by 17, 18 and 19-year-olds. They are holding the (threat) of expulsion over our faces … Howard was supposed to protect us. Frederick was supposed to protect and nurture me. The only thing protecting me is the community. We need your help and protection.”

Hill and others said students have been braving the elements, sleeping on concrete, dealing with the rain, while others have pitched tents.

“On October 4, I took part in a protest and marched around the perimeter of the campus with my fellow students, stating our grievances with [the] administration,” said HU junior Enoch Jones. “Before we marched, we stood on the yard for hours with a banner and encouraged observers to participate by writing down any problems they had with administration.”

Jones, a New Yorker majoring in television and film with a theatre art minor, said shortly after the protest began that students have a right to protest the abominable conditions.

“Students have uninhabitable living conditions, faculty members have not been paid, students don’t feel safe enough to leave their dorms, amongst countless other issues,” Jones said. “It is now October 19th, and we have been at Blackburn for over a week due to demands not being met. The response from the general public as well as the community has been so loving and supportive. It is honestly a shame that we are still waiting for action however, if not now then when? We are the revolution.”

Both Frederick and Evers have published public letters demanding that the students end their protest action.

“The occupation of the Blackburn center must end,” he wrote in an Oct 26 letter. “There may be areas where we agree to disagree. That’s the nature of a vibrant community. However, Howard University’s proud tradition of student protest has never been – and can never be – invoked as a justification for tactics that harm our students. The current occupation of the Armour J. Blackburn Center is a departure from past norms.”

Attorney Donald Temple, who is representing the students pro-bono, said he and student leaders have had several fruitless meetings with university administrations, with Evers demanding that all protestors leave Blackburn before administrators will even consider negotiations. On top of that, Temple and students say, both Evers and Frederick have threatened to expel or otherwise punish those involved in the protest.

“There are things you don’t know that I’ve seen,” Temple told members of Howard Alumni United last Monday night. “At our second meeting with the lawyer and Dr. Evers, they told the students there wouldn’t be negotiations. Afterwards, one of the student leaders cried for 30 minutes. This morning I was talking to another student and she was so frustrated and courageous. While we were talking, she said, ‘That will be $5.50.’ She is working a job at a coffee shop.”

“This movement is led by all young women who are 17, 18, 19, 20 years old. The PR person is 20. They are carrying these increasing loads, dealing with 50- and 60-years-old with triple degrees. One young woman said, ‘I’m not fighting for me or the students here but students coming and those after that.’”

One of the leaders, Aniyah Vines, a senior political science/criminology double major and also the founder of @_thelivemovement, said students didn’t take this action lightly.

“This is not a big sleepover or us being rebellious,” she said.

Vines said she and her colleagues want Frederick and administrators to be held accountable and responsible for what was an avoidable situation; is demanding that officials develop a housing plan; and is also demanding a “legal, academic and disciplinary amnesty.”

“This could have ended long ago. but we haven’t gotten anything,” she said. “We’ve been asking to meet with the people who govern this university. We have a right to protest. We will be staying here. We will not leave … We will not fold, we will not bend until we get what we want.”

Fear of retaliation is what prompted the protestors to call last Sunday’s emergency town hall meeting and ask for support against the threats and possible retaliation from university administrators. A number of groups and individuals have stepped up so far. Those include the Capstone Group; several HU alumni groups; students from Atlanta, including Morehouse. Clark-Atlanta University and Spelman University; poet Sonia Sanchez, and the Revs. William J. Barber, II and Jesse Jackson.

“This was a very necessary protest,” Rev. Jackson said during the Sunday Zoom meeting. “I talked to Frederick last week after many calls and told them to negotiate. This must be a national issue of education for our youth. It’s taken off like wildfire in schools across the country … you can’t lawyer your way out of this. It’s a moral issue.”

Jackson praised the protestors for their deportment and resolve.

“They are disciplined, focused and level-headed students,” he added. “I have been in some of America’s best jails. I stand by you. We’re going to fight this thing until we win.”

HU grad April R. Silver, one of the leaders of the student takeover of Howard’s A Building in 1989 to demand the removal of Lee Atwater from the Board of Trustees, said it is incumbent upon those who love Howard University to gather around and protect the Baby Bisons.

“Sonia Sanchez gave us the language on how to push back,” she told the several hundred members of Howard Alumni United. “We’re airing our dirty laundry because we love this institution. It’s absolutely unprecedented. We’ve never had students, alumni, faculty and parents come together to wrap ourselves around our Baby Bison.”

She said it’s clear that things have not changed. While it is inexcusable, absurd and obscene that Frederick hasn’t met with the students yet, she said she and her colleagues need to acknowledge that the president and the board chair are Howard alumni who also love their school.

At Silver’s invitation, Newark Mayor Ras Baraka interrupted a meeting he was attending and joined the Zoom call to offer his support.

“You can’t miss what’s going on down there,” he said. “… I’m just appalled at everything that’s happening. It’s sad,” said Baraka, son of legendary poet Amiri Baraka and one of the leaders of the 1989 takeover. “The university didn’t think it was wise and prudent to resolve the issue and put this behind us … It’s scary that someone is as out of touch as (former HU President James E.) Cheeks. It’s important for alumni to stick together. Students have support. This needs to be resolved. It’s not the right time for the administration to not be acting serious.”