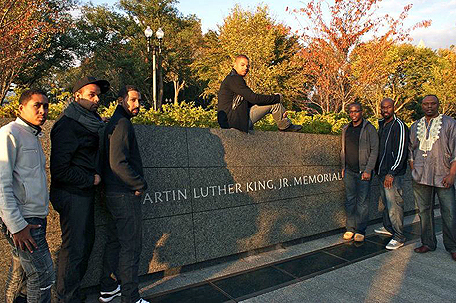 Washington, DC – As a response to the growing needs of same-gender-loving (SGL) and bi-sexual black men, Black Men’s Xchange (BMX) National remains in the
forefront as an organization aggressively advancing an agenda that addresses issues pertinent to the overall health and well-beingness of the Black
community at large. In addition to the establishment of a new BMX chapter on the historic campus of Howard University, Black Men’s Xchange (BMX) National
designed, coordinated and conceived the “Innovations in Black MSM Policy and Advocacy Summit” recently held in New York.

With financial support from the Ford Foundation, the summit gathering included Brotherhood, Inc., the Hetrick Martin Institute where the event was held and
Jamaal Clue of The National Alliance of State and Territorial AIDS Directors (NASTAD). Collaborators engaged, examined and analyzed policy and advocacy
issues focusing on Black men, HIV policy, prevention and care.

“The summit played a crucial role in dissecting the current HIV policy paradigm in relation to Black men. Current policy is built upon a system that has
not been responsive to the needs of Black men; a system plagued by institutional racism,” cites John-Martin Green, leader of the BMX chapter in NYC.

“Among a number of strategies, the summit posed the question: How will we address health issues uniquely faced by Black men – for example – HIV, if we do
not have ‘indigenous and culturally embedded’ black men at the forefront of this struggle? We expect that it is in this question of leadership that we will
find the answers and the approaches we need to reframe the paradigm,” adds Michael James Foster, Chief Operations Officer of Black Men’s Xchange National.

The implementation of their new Washington DC-based chapter is another important cornerstone for BMX. Offers BMX founder Cleo Manago, “We have been
concerned for some time regarding issues among same gender loving and bi-sexual black men in the Washington DC area. Though several DC residents attend our
Baltimore chapter, we had been receiving calls over the years for a chapter to be established in the capital. When local community activist Kevin Sanders
contacted us asking if he could start a BMX chapter there, we felt it was time to make it a reality.”

The Washington DC chapter of BMX is poised to implement weekly empowerment and educational gatherings to be held in partnership with Howard University. The
chapter will also convene community forums and town hall meetings. In addition, there are plans in place to work with local organizations who are
interested in serving black men more effectively toward helping to resolve health and wellness disparities facing African-Americans in the DC area.

Manago also informs that his study, the Critical Thinking and Cultural Affirmation (CTCA), will be utilized to assist with the unparalleled HIV AIDS crisis
facing diverse black men in the area. CTCA is a culturally informed preventive health strategy that addresses positive mental, sexual and community health,
encouraging self-actualization, cultural empowerment and responsibility.