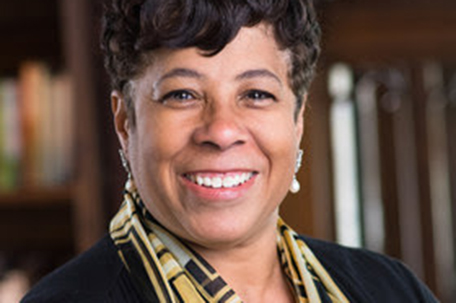 WYNNEWOOD, Pa. — James C. Wright, clerk of the board of trustees at Friends’ Central School, has announced the board’s unanimous approval of the appointment of Interim Head of School Beth D. Johnson (’77) — a respected leader at Friends’ Central for nearly three decades and a beloved member of the school community since childhood — as the 12th head of school in Friends’ Central’s history, effective immediately.

“In a very short time [as Interim Head], Beth has engaged and energized the School community and brought a vision that aligns with specific needs of the school,” Wright said in a message to the Friends’ Central community. “In short, she is leading our venerable School with vision, purpose, and joy.”

Johnson, who had been appointed Interim Head in January 2021, is the first Black educator, the first woman, and the first graduate of the School to serve as Head in the 177 years since Friends’ Central’s founding.

“I’m honored by the Board’s appointment,” Johnson said. “Every day I come to work, I’m humbled by the trust, support, and love of the Friends’ Central community — students, alumni/ae, parents, faculty, administrators, and neighbors who share my commitment to aiming higher, digging deeper, and going further to peacefully transform the world through education.”

“Friends’ Central is a unique community,” she continued. “We offer rigorous intellectual and educational opportunities, but we do so with an element of relationship and community that is so special and different from any other school. And it’s true for generation after generation.”

Wright said that Johnson’s emotional intelligence, empathy, relentless positivity, and full embrace of the School’s core values played as much of a role in the Board’s unanimous approval of her appointment as the positive trends in measurable outcomes during her tenure as Interim Head.

“Beth lives and breathes Quaker values and practices,” Wright said. “She is universally admired for her acute intelligence, humor, warmth, and ever-positive outlook. Despite the hindrances of the pandemic, her welcoming and caring personality has made the atmosphere at Friends’ Central so joyful that everyone who comes to campus remarks on it.”

Friends’ Central School is a Quaker, independent, coeducational, college-preparatory day school for students in Nursery through grade 12. Located on 41 acres across two campuses in Wynnewood, Pa., Friends’ Central cultivates the intellectual, spiritual, and ethical promise of students. We go further. Guided by Quaker values, since 1845, Friends’ Central School has been educating for excellence, inspiring tomorrow’s leaders, honoring each individual, and encouraging students to peacefully transform the world.

Another COVID side effect: Many kids head to summer school