Allow me to introduce myself…. 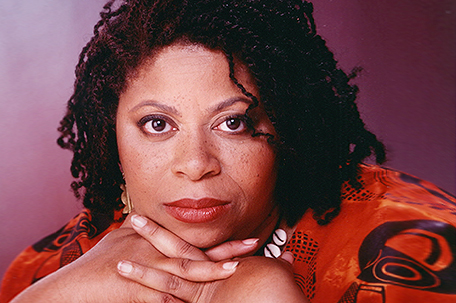 Something just occurred to me! I’ve been writing “The Literary Lounge” column here in the Philadelphia SUN for a few weeks now and I’ve never introduced myself.

My name is Karen E. Quinones Miller, and while I’m originally from Harlem (Holla!), I’ve lived here in Philadelphia for the past 27 years.

But that doesn’t qualify me to write a literary column.

I’m the mother of beautiful, young woman named Camille Miller, but that doesn’t qualify me to write a literary column (although it’s something of which I’m extremely proud)

I play a mean game of bid whist. (Six, no trump. Downtown!), but that doesn’t make me qualified, either.

However . . . I’ve been a journalist for 20 years and have worked for several major newspapers. I’ve taught journalism at Temple University. I’ve had eight – no, nine – books published by major publishing houses; six of which landed on Essence Magazine’s Bestseller List. I’ve been nominated for an NAACP Image Award for Outstanding Literature. I’ve given workshops and lectures on publishing and writing around the country. I’ve . . . heck, you get the picture. I’m qualified.

At least J. Whyatt Mondesire, the publisher of this newspaper, thinks I am. And if you really think about it, that’s all that matters. <smile>

So, what can you expect to read in The Literary Lounge? Well, I’ll be writing about pretty much anything to do with books, publishing, reading, and writing. And if you have any suggestions about topics please just contact me here at the SUN and I’ll do my best to accommodate.

Now that’s what you can usually expect to find in The Literary Lounge. But this week I’m going to actually do something a little different.

If you’ll indulge me a moment, I need to write about something that’s been plaguing my linguistic mind for a while now. And I hope you’ll further indulge (or, at the very least, excuse) an outward display of my inner William Shakespeare.

Texted or Texted . . . that is the question.

Whether tis Nobler to the ear to suffer

The Slings and Arrows of insecure people

Or to take courage and correctly pronounce

The word with two syllables.

It was only in the late 1990’s that all of a sudden “text” went from simply words on some kind of a document to something people do on a cell phone.

As a noun, we never had to worry about “text” having a past tense. What is the past tense of “desk,” after all? But since “text” is now not only a noun, but also a verb, the pronunciation of the past tense “texted” suddenly became an issue.

For years I avoided saying the past tense of the verb aloud so that I wouldn’t have to publicly face this dilemma. Every part of my being wanted to use the two-syllable pronunciation, but the first time I said it out loud a family member looked at me and said, “That sounds so ignorant. If you know better than to say ‘like-ted,’ why would you think it’s okay to ‘text-ted,’ Karen?”

But the more I thought about it, the more I rejected the “like-ted/text-ted” argument. And I want to kick myself for ever having accepted it in the first place.

The past tense for words that end in the “k” sound is to add a “t” sound to the end of the word. Hiked is pronounced “hikedt” not “hike-ted” just like booked is pronounced “bookt” and not “book-ted.” Following that rule, liked and looked would have a one-syllable pronunciation, also. To pronounce them any other way would be incorrect.

In fact, MANY (not all, but many) words that end with “t” need to have “ted” tacked on it when changed past tense — to ensure people know to use a two-syllable pronunciation. Bat becomes “bat-ted,” chat becomes “chat-ted,” and pat becomes “pat-ted.”

But again, ALL words that end with a “st” sound need that second syllable to become past tense.

“Text” ends with a “kst” sound. I offer that – at best – the pronunciation is up for grabs, but I believe the correct pronunciation is “text-ted” — following the “st” rule rather than the “k” rule.

So I finally took a deep breath and loudly announced — in a room full of people — that “I just ‘text-ted’ my nephew and told him to pick up some ice cream to go with the cake.” I gave a furtive glance over the crowd to see if anyone had that “I thought she was more intelligent than that,” expression on their face. No one did.

BUT! BUT! BUT . . . someone did say, “I’ve always wondered what the correct pronunciation should be. Text or texted.”

I gladly explained my reasoning and once I did, almost everyone in the room agreed with me. Many even seem relieved to have the, largely unspoken, argument settled once and for all.

However, one person piped up, “I’m sorry. If we all know it’s ignorant for people say ‘look-ted’ it’s ignorant to say ‘text-ted.’”

I didn’t bother to point out again that ‘look-ted’ is incorrect, but to say ‘text-ted’ is no more ignorant than it would be say ‘rest-ted.’ I just gave her an up and down look, then smiled and plastered an “I thought she was more intelligent than that,” expression on MY face before changing the subject.

I can’t wait for modern technology to come up with a way to make “next” a verb!