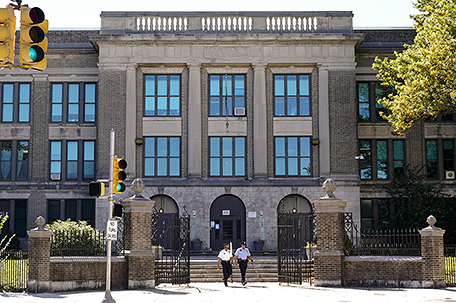 ABOVE PHOTO: Police officers walk from Roxborough High School near where multiple people were shot in Philadelphia, Wednesday, Sept. 28, 2022. Authorities have identified the 14-year-old youth killed in a shooting on Tuesday that also wounded several other teens as they walked away from a Philadelphia high school athletic field after a football scrimmage. (AP Photo/Matt Rourke)

PHILADELPHIA (AP) — Authorities have announced charges against a second suspect in last month’s ambush shooting outside a Philadelphia high school that killed a 14-year-old and wounded four other teenagers after a football scrimmage.

District Attorney Larry Krasner said Wednesday that 21-year-old Yaaseen Bivins has been arrested and charged with murder, four counts of aggravated assault and related offenses in the Sept. 27 shooting outside Roxborough High School. It wasn’t immediately clear if he had an attorney; listed numbers for him weren’t working Wednesday.

Police said earlier they were seeking a 16-year-old on active arrest warrants for murder and attempted murder as well as criminal conspiracy, theft, obstructing justice, evidence-tampering and firearms offenses.

Authorities said five people jumped from a parked SUV and opened fire on teens walking away from an athletic field at the high school. Nicholas Elizalde, 14, of suburban Havertown, was killed and three other teens were rushed to a hospital. One was treated at the scene.

The shooting drew national attention around the U.S. amid a string of mass shootings and also came just after Philadelphia surpassed 400 homicides for the year, only slightly behind the pace of last year’s toll, which ended up being the highest in at least six decades.

Police said the shooters appeared to be juveniles, and they were also seeking a sixth person who remained in the vehicle. They said one of the shooters chased a 17-year-old victim down the street, striking him with shots to the leg and arm, and tried to fire as he stood over the victim but the gun either jammed or was out of bullets.

Police have said Elizalde is not believed to have been one of the intended targets. Hours before the shooting, Mayor Jim Kenney, a Democrat, had signed an order banning guns and deadly weapons from the city’s indoor and outdoor recreation spaces, including parks, basketball courts and pools. A judge has barred the city from enforcing that order, siding with a legal challenge citing state law barring any city or county from passing gun-control measures.