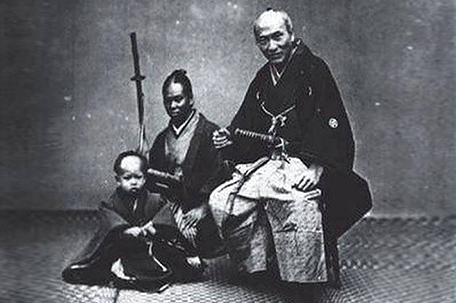 Japan is not a place one would usually associate with immigrants from Africa or the Caribbean. Yet in the late 16th century Japan’s most powerful warlord, Oda Nobunaga, had a African page named Yasuke. It is belived that Yasuke was either a Makua originally from Mozambique or from somewhere in the Congo region. Yasuke was not only a cultural curiosity but also served as Nobunaga’s bodyguard and was granted the prestigious rank of Samurai.

Yasuke arrived in Japan in 1579 as the servant of the Italian Jesuit Alessandro Valignano, who had been appointed the Visitor (inspector) of the Jesuit missions in the Indies, i.e. S. and E. Asia, an extremely high position, so Yasuke must have been quite trustworthy. He accompanied Valignano when the latter came to the capital area in March 1581 and caused something of a sensation. In one event, several people were crushed to death while clamouring to get a look at him. Nobunaga heard about him and expressed a desire to see him. Suspecting the black color of his skin to be paint, Nobunaga had him strip from the waist up and made him scrub his skin.

We do not know this Yasuke’s original Makua name, but the Japanese called him Yasuke. The reason for this name is unknown as it does not have a clear meaning and that it is most likely a “Japanization” of his actual name.

He was apparently 6ft 2in and would have towered over the Japanese of the day. Nobunaga first heard of Yasuke when the news reached him in 1581 of the great crush that had occurred when Valignano had brought him to Kyoto where his skin colour and height attracted a huge crowd. Nobunaga ordered the Jesuit to bring Yasuke to his court so that he could see this sensation in the flesh.

Japanese sources described Yasuke as “looking between the age of 24 or 25, black like an ox, healthy and good looking, and possessing the strength of 10 men. Nobunaga was further intrigued by the fact that Yasuke could speak Japanese (albeit not perfectly) and ordered Valignano to leave Yasuke in his care when the Jesuit prepared to leave again.

Yasuke became a permanent fixture in Nobunaga’s retinue, his size and strength acting as a deterrent to assassination not to mention a flavour of exoticism to accompany the warlord’s other Western possessions. Apparently Nobunaga became so fond of Yasuke that rumours abounded that the slave was going to be made a Daimyo (a Japanese land-owning lord). These rumours were proven wrong, however, Yasuke was given the honour of being made a member of the samurai class, a rare honour among foreigners. “

You can read more about Yasuke on this link- http://en.wikipedia.org/wiki/Yasuke

**Important note: Obviously the photo shown is not from the 16th century, because there weren’t any cameras back then. The people in this photo were just stage actors who posed for this shot.

Helping the people of Japan in the face of tragedy