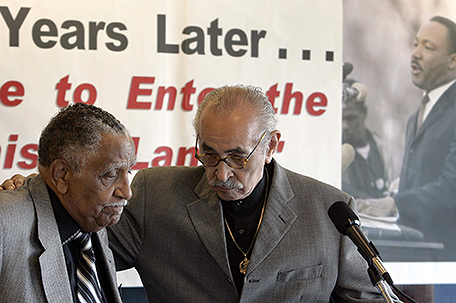 ABOVE PHOTO:  Civil Rights leaders Joseph Lowery, left, and Wyatt Tee Walker, right, take to the podium during a rally at the National Press Club in Washington, Tuesday, July 2, 2008 to present a retrospective of where the nation has come in the 45 years since Dr. Martin Luther King’s “I Have a Dream” speech. (AP Photo/Susan Walsh)

“The passing of Dr. Wyatt Tee Walker marks the transition of one of one of the greatest social justice and theological minds of our time. Walker was the first Chairman of the National Action Network and a man that mentored me as a civil rights and social justice leader, and while I am saddened by his passing, I am committed to carrying on his legacy. It is both a personal and global loss to me. May he rest in peace.”

The Massachusetts-born Walker served as a pastor in Virginia before joining the National Association for the Advancement of Colored People and later the state’s Congress of Racial Equality.

He went on to become a key member of the Southern Christian Leadership Conference headed by King.

Walker rose quickly in the organization and was named its executive director in 1960.

He helped organize the 1963 March on Washington and was picked to be King’s chief of staff the following year.

In a book on NAN’s history written by Jamal Watson, Dr. Walker is quoted as saying the following about NAN: “When I got involved, NAN was still just an idea,” Walker recalled. “I helped to give the organization some infrastructure. I helped to fund the organization out of my own pocket.”

Rev. Sharpton credits Dr. Walker with helping bring structure to NAN, bringing him to meet Nelson Mandela in South Africa, and traveling with him to other places around the world. He also brought in preachers from around the country to work with NAN and serve on its board.

National Action Network is one of the leading civil rights organizations in the Nation with chapters throughout the entire United States. Founded in 1991 by Reverend Al Sharpton, NAN works within the spirit and tradition of Dr. Martin Luther King, Jr. to promote a modern civil rights agenda that includes the fight for one standard of justice, decency and equal opportunities for all people regardless of race, religion, nationality or gender.