World Scrabble title scooped by Nigerian in first for Africa 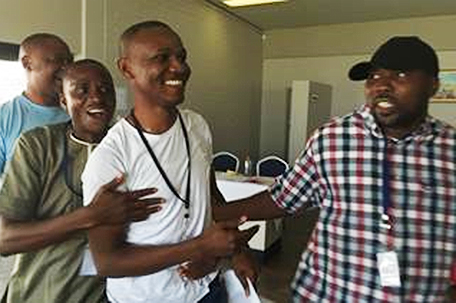 No one disputes the enormous gifts that Africans bring to the global table. But Scrabble?

A Nigerian college graduate is just the latest African winner of the brainiac’s board game apparently loved around the world.

Wellington Jigher joins Elisee Poka from Ivory Coast who won the French-language Scrabble World Championship in 2008 and Schelick Ilagou Rekawe from Gabon who this year reached the final stage of that competition.

This week, Wellington bested the competition at the World English-language Scrabble Players’ Association Championship, playing 129 competitors in 32 rounds of matches in four days.

He beat Lewis MacKay from England 4-0 in a best of seven final played in Perth, Australia.

Writing on his Facebook page, Jigher, 32, said he felt the whole continent behind him as he played. Still, it was baffling, he confessed, that he managed to win given that he had not been sleeping well.

“Thanks all, for the prayers and the support,” he wrote on FB. “Just like our Oga, Sammy Okosagah, alluded to earlier on, it was a battle between one man and a whole continent. It was like I was borrowing the “pickability” of all the glorious pickers in the house.

“I’ll be releasing a more appropriate statement later,” he wrote. “I really must endeavor to rest now. I’ve not slept well in about a week. The fact that I was able to perform in spite of the sleeplessness still baffles me. It only goes to prove that God was deeply involved in this matter. To him alone be all the glory!”

They had arrived in Australia the day prior to the contest which left little chance to get over the 20-hour flight or the seven-hour time difference.

Among Jigher’s winning word combinations were ‘dacoit,’ ‘Aah,’ and ‘ungifted.’ He also came up with “fahlores” “avouched” and “mentored” for high scores.

President of Nigeria’s Scrabble Federation, Sulaiman Gora, described the dapper Wellington, who seemed to have a limitless assortment of hats, as a quiet person whose “greatest strength is humility”.

Gora, who also heads the Pan-African Scrabble Federation, said that the “whole country and the whole of Africa is celebrating this success”.

The champion will be coming home with a $10,000 prize but now has to find a job.