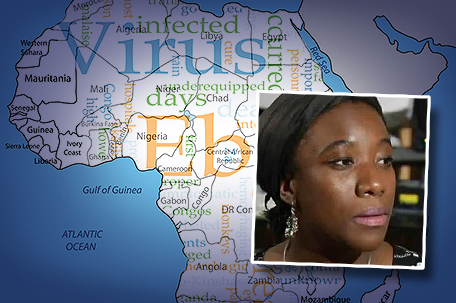 As an Ebola epidemic sweeps relentlessly across West African borders, with the death toll topping 600, some are now asking if the virus can be stopped.

The Ebola outbreak started in Guinea and spread to Liberia and Sierra Leone. It has been called the deadliest in recorded history, with Doctors Without Borders (MSF) and the World Health Organization declaring the situation out of control.

The skyrocketing infection rate reflects an ominous reality –under-funded public health systems, too few clinics for too many people, underpaid health professionals, and citizens distrustful of the prescriptions of unfamiliar foreign health aides. Traditional healers are viewed more favorably than unfamiliar health workers in many cases. This week, the Red Cross working in Guinea suspended some operations in the country’s southeast after staff working on Ebola received threats.

“Locals wielding knives surrounded a marked Red Cross vehicle,” said one Red Cross official, asking not to be named. An MSF center elsewhere in Guinea was attacked by youths saying the charity brought Ebola into their country.

The current outbreak has exposed the inadequacy of the region’s health care systems.

In a World Bank survey, Guinea had one of the lowest numbers of hospital beds per person – with just 0.3 beds per 1,000 people. Sierra Leone, which offers free care to pregnant women, has three doctors per 100,000 people. Liberia has only 51 doctors, according to the World Health Organization.

Combined with that is a high turnover at public health units. Nurses in Sierra Leone earn roughly $1.80 a day – meaning that new, untrained staff are commonly at the frontline of the health care system. Meanwhile, U.S. health officials at the Center for Disease Control (CDC) tried to dismiss fears that the virus would reach American shores.

“Ebola virus disease poses little risk to the U.S. general population at this time,” advised a CDC “level 2” alert, which cautions people in the affected region to avoid contact with anyone who seems infected. “However, U.S. healthcare workers are advised to be alert for signs and symptoms of Ebola virus disease in patients who have a recent (within 21 days) travel history to countries where the outbreak is occurring,” it reads.

“If we ever needed a reminder that we all live in a connected world, this horrible Ebola outbreak is it,” said Stephan Monroe of CDC’s National Center for Emerging & Zoonotic Infectious Diseases

That means the U.S. and other countries have a stake in investing in developing countries, whose needs may seem to be far from U.S. domestic priorities.

Back in the U.S., the American wife of Patrick Sawyer, was grieving the unexpected death of her husband, a U.S. citizen of Liberian ancestry, who had been traveling to Lagos, Nigeria, from a Liberia stopover when symptoms of the disease emerged. Decontee Sawyer, of Coon Rapids, Minnesota, said her husband had planned to return next month for the birthdays of his daughters.

The grieving widow said she hoped her husband’s death would be a wake-up call about the global threat of the virus. “Patrick could’ve easily come home with Ebola,” she told Minnesota’s KSTP-TV.