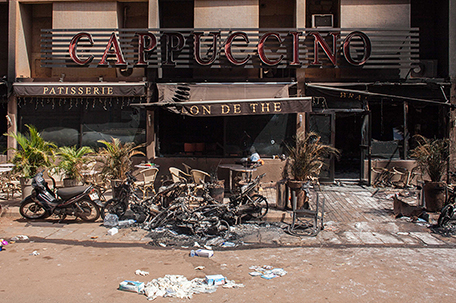 ABOVE PHOTO:  Debris outside the Cappuccino cafe Monday, Jan. 18, 2016, after militants led an attack on a hotel and a cafe popular with foreigners over the weekend in Ouagadougou, Burkina Faso. In the wake of the attack that left over 30 dead, security was beefed up across Burkina Faso’s capital Monday as businesses and banks reopened. The West African nation also announced a joint effort with Mali in the fight against jihadi elements in the West African region.  (AP Photo/Theo Renaut)

By Babacar Dione and Baba Ahmed

DAKAR, Senegal — At the entrance to the King Fahd Palace hotel, security guards are inspecting the trunks of every taxi at the gate, long before the vehicles get anywhere near the building itself.

After the recent attacks on upscale hotels and restaurants in two other West African capitals, no one here in Dakar is taking any chances.

The violence in Bamako and Ouagadougou underscores how danger has moved from the jihadist strongholds far in the desert to the very places where Westerners stay and eat while working in the region. In Senegal, there is a growing sense of vulnerability and an acknowledgement that security forces can only do so much.

“The terrorists have hit Mali and Burkina Faso – Senegal is no stronger than these countries,” said Joseph Mendy, a bank employee in Dakar. “If they had the chance, the terrorists would not hesitate to attack the country. Senegal must be extra vigilant.”

In the part of Africa known as the Sahel just south of the Sahara Desert, violent jihadism is nothing new. Large swaths of the region have long been considered no-go areas for Westerners because of the risk of kidnappings for ransom by al-Qaida and others.

Extremists ruled the towns of northern Mali for nearly a year, implementing public whippings and amputations until French forces dislodged them from power. And the Nigeria-based group Boko Haram has carried out suicide bombings in Niger, Chad and Cameroon.

But the recent assaults on hotels in Bamako and Ouagadougou mark a dramatic escalation, striking at the very places that were still considered relatively safe in an increasingly dangerous region. They also highlight the threat still posed by al-Qaida in the region even as attention had turned to the danger of Boko Haram after it aligned itself with the Islamic State.

“The terrorist threat is spreading in the Sahel, and terrorist groups that are being driven out of Mali by French forces want to set up small groups a bit throughout the region,” said Cynthia Ohayon, a West Africa analyst for International Crisis Group.

Senegal’s president, Macky Sall, has warned that extremism has no place in this country where Muslims and Christians live together peacefully. Late last year he even proposed banning women from wearing the burqa, the head-to-toe covering which some male jihadists also have worn to hide their explosive belts in other countries.

The jihadists behind the Ouagadougou attack have called the bloodbath that left 30 dead “a drop in the sea of global jihad” and said it comes “within a series of operations to cleanse the land of Islam and Muslims from the dens of global espionage,” according to a translation published by SITE Intelligence Group.

At the Radisson Blu hotel in Bamako, Mali, guests have returned two months after Islamic extremists killed 20 there. Hisham Ahmed, 40, sits with his coffee and iPhone at the hotel cafe, dressed in a white polo shirt, jeans and yellow leather shoes.

“Already when I see the armed soldiers in front of the big metal door out front, it feels like I am entering a military camp,” he confesses. “So I do feel a bit unsafe because it reminds me of the insecurity in this country.”

Ahmed knows that the best security in Mali, as in any country, can’t be seen to the casual observer. And while he worries about whether jihadists could scale a fence or mount an attack from a nearby house: “I come here anyway because I have my projects.”

The attack on the Radisson Blu, like the recent violence in Ouagadougou, was claimed by an alliance between al-Qaida and the feared Algerian extremist Moktar Belmokar. In addition to staging attacks in Mali, he also was behind a series of bombings in Niger in 2013. Now people across the region wonder what his next target will be.

Burkina Faso had been considered one of the safer countries in the region until Friday’s attack. Still, there had been a sense of inevitability among some in Ouagadougou given the proximity to extremism and the porous borders in this corner of the world. At least one government official told The Associated Press back in December it was “only a matter of time” before Burkina Faso would be hit hard.

According to security officials, authorities in Burkina Faso also had begun monitoring activities in mosques and the movement of some imams they suspected of fomenting extremism. In early December, several men from Niger and Nigeria who said they were coming to preach in Burkina Faso were questioned and then expelled from the country’s east.

Given the Sahel region’s porous borders, authorities acknowledge they must do a better job of sharing information if they are to combat extremism.

“From now on we are going to take all measures to prevent such things from happening again.”