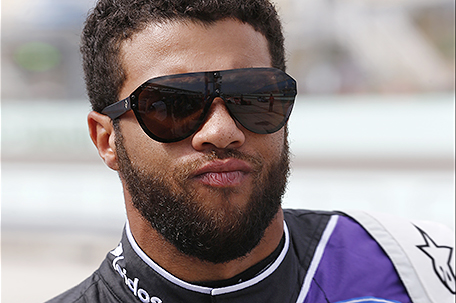 CHARLOTTE, N.C. — Darrell Wallace Jr. will become the first Black driver to race at NASCAR’s top level since 2006 when he replaces injured Aric Almirola this weekend at Pocono Raceway.

Richard Petty Motorsports said Wallace, more commonly referred to by his nickname “Bubba,” will be the replacement in the No. 43 until Almirola returns.

“Driving the famed 43 car is an unbelievable opportunity for any race car driver,” said Wallace. “With all that Richard Petty has contributed to the sport, I’m honored to start my first (race) with this team.”

Wallace, 23, is only the fourth black driver in one of NASCAR’s top national series. Wendell Scott raced from 1961-73 in Cup, Willy T. Ribbs did three Cup races in 1986 and Bill Lester raced sporadically from 1999 until 2007 at all three national levels.

Wallace won the Truck Series race at Martinsville Speedway in 2013 to become the first black driver to win at a national NASCAR series event since Wendell Scott earned a Cup victory on December 1, 1963.

Wallace raced in the Xfinity Series for Roush, but the team announced that he will transition from its Xfinity car to RPM. Without Wallace, Roush Fenway will suspend the No. 6 Xfinity team at Pocono.

The team and Wallace will evaluate opportunities for him to run other Xfinity races this season.

“We are very proud of Bubba and his development at Roush Fenway Racing,” team President Steve Newmark said. “We believe that Bubba has tremendous potential and will continue to excel in NASCAR’s top series. He has been a great representative of our organization both on and off the track and we’ve enjoyed being part of his growth as a driver.”

Almirola fractured a vertebra during a fiery wreck last month at Kansas Speedway and is out indefinitely. Almirola and Wallace both drive Fords.

Wallace has five years of experience in the Xfinity and Camping World Truck Series, and has five wins and 20 top-five finishes.

“We are excited for Bubba to get this opportunity,” said Dave Pericak, global director for Ford Performance. “We couldn’t be happier with the progress of Aric Almirola’s recovery and can’t wait to get him back. In the meantime, this is a great opportunity for Bubba to show what he can do at the top level of the sport, and we are committed to helping RPM win races.”

Officer tells black driver: ‘I don’t care about your people’