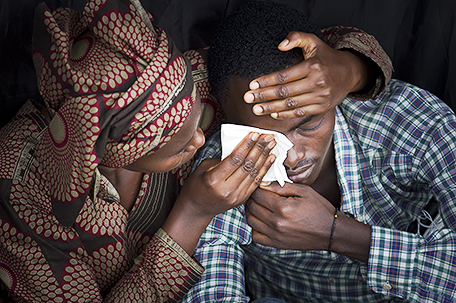 ABOVE PHOTO:  Bizimana Emmanuel, who was born two years before the genocide, is consoled by an unidentified woman while attending a public ceremony to mark the 20th anniversary of the Rwandan genocide, at Amahoro stadium in Kigali, Rwanda, Monday, April 7, 2014. Sorrowful wails and uncontrollable sobs resounded Monday as thousands of Rwandans packed the country’s main sports stadium to mark the 20th anniversary of the beginning of a devastating 100-day genocide.   (AP Photo/Ben Curtis)

KIGALI, Rwanda — Displaying both pride and pain, Rwandans on Monday marked the 20th anniversary of a devastating 100-day genocide that saw packed churches set on fire and machete-wielding attackers chop down whole families from a demonized minority.

Bloodcurdling screams and sorrowful wails resounded throughout a packed sports stadium as world leaders and thousands of Rwandans gathered to hear of healing and hope.

“As we pay tribute to the victims, both the living and those who have passed, we also salute the unbreakable Rwandan spirit in which we owe the survival and renewal of our country,” said President Paul Kagame.

Kagame and U.N. Secretary-General Ban Ki-moon together lit a flame at the Kigali Genocide Memorial Centre, which estimates that more than 1 million Rwandans perished in three months of machete and gunfire attacks mostly aimed at the country’s minority Tutsi population by extremist Hutus

Missing from the stadium was the French government, which Rwanda banned. In an interview published in France on Monday, Kagame accused the former African colonial power of participating in some of the genocide violence.

The ceremony and Uganda’s president highlighted the influence that white colonial masters had in setting the stage for the violence that erupted on April 7, 1994. Stadium-goers watched as white people in colonial outfits jumped out of a safari car and stormed the main stage.

The wide-brim hats then changed to blue berets, the headgear worn by U.N. troops who did nothing to stop the carnage. Ugandan President Yoweri Museveni in his speech blamed colonization for many of Africa’s violent troubles.

“The people who planned and carried out genocide were Rwandans, but the history and root causes go beyond this beautiful country. This is why Rwandans continue to seek the most complete explanation possible. We do so with humility as a nation that nearly destroyed itself,” Kagame said.

During an intense scene on the sports field, a young girl of perhaps 10 recounted the torture of a young boy. Spectators screamed and the severely traumatized were carried off.

The blue beret actors evacuated and Rwandan troops – symbolizing the Tutsi military force Kagame led back then – stormed the field.

Rwandans in white and grey lay scattered throughout the field, representing the dead.

Ever since the killing spree, the world community has been forced to acknowledge it did nothing. The U.N. chief said he hopes to reaffirm the international community’s commitment to the idea of “never again,” though he said genocide is still possible. He mentioned violence in the Central African Republic and Syria.

The U.S. ambassador to the United Nations, Samantha Power, said the genocide was a “devastating reminder that nightmares seemingly beyond imagination can in fact take place.”

As genocide survivor Fidele Rwamuhizia recounted his tale – he hid in a mosque where many people were slaughtered – it triggered emotional reactions that required some mourners to be assisted by counselors.

The genocide required hundreds of mass graves to bury the victims of what the government says was a long-planned killing spree that ignited after the plane of then-President Juvenal Habyarimana, a Hutu, was shot down.

Kagame has won praise for pulling his country out of the violence. His government has advanced women’s rights, economic development and health care. But critics say that progress has been marred by an authoritarian approach that has seen government critics and opposition members killed.

“We are now 20 years after the genocide, so we cannot continue to do the same things we did in 1995 or in 2000. So we ask the government to open up more space, allow more opinion, allow more political parties, but also enforce the rule of law,” Frank Habineza, the leader of Rwanda’s only opposition political party, said in an interview.

“The laws of Rwanda guarantee freedom of expression and association but in reality things happen otherwise.”

Human Rights Watch, which Kigali practically views as an enemy organization, says civil and political rights in the country remain severely curtailed. It said the persistence of attacks on Rwandan government critics in exile “is striking.”

The Rwanda-France diplomatic feud escalated as Jeune Afrique published an interview Monday in which Kagame accused France and Belgium of having done too little to save lives. He accused France of participating in the execution of parts of the genocide violence.

In response, the Paris government said France’s justice minister would not travel to Kigali as planned. France’s ambassador to Rwanda says he was then barred from Monday’s ceremony.