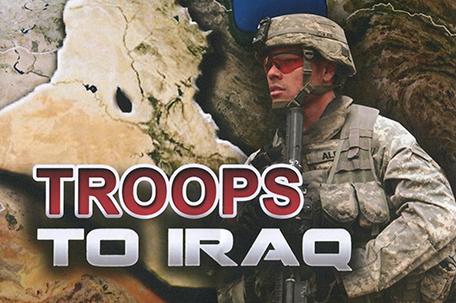 By Lara Jakes and Julie Pace

WASHINGTON — President Barack Obama will speak about the situation in Iraq from the White House Thursday afternoon.

His comments will follow a meeting with his national security team where he is expected to discuss U.S. options for responding to the deteriorating situation in Iraq. The administration has been weighing whether to press the Shiite prime minister in Baghdad to step down in a last-ditch effort to prevent disgruntled Sunnis from igniting a civil war.

A U.S. official says Obama is expected to announce the deployment of about 100 Green Berets to Iraq to help train and advise the Iraqi forces. The official insisted on anonymity because this person was not authorized to publicly discuss the plan ahead of Obama’s announcement.

In the strongest sign yet of U.S. doubts about Iraq’s stability, the Obama administration is weighing whether to press the Shiite prime minister in Baghdad to step down in a last-ditch effort to prevent disgruntled Sunnis from igniting a civil war.

More so than airstrikes or other American military action, top U.S. officials believe that giving more credence to Sunni concerns about Prime Minister Nouri al-Maliki can stave off another deadly round of sectarian fighting of the kind that engulfed Iraq less than a decade ago.

President Barack Obama is expected to discuss U.S. options for responding to the crumbling security situation in Iraq with his national security team Thursday. The president has been weighing a range of responses, including sending a small contingent of U.S. special forces to Iraq to help train security forces there and launching limited airstrikes, though that option has become less a focus of the deliberations in recent days.

It is unclear whether Obama or other administration officials would publicly call for al-Maliki to resign. U.S. officials said there is concern within the administration that pushing al-Maliki too hard might stiffen his resolve to stay in office and drive him closer to Iran, which is seeking to keep the Shiite leader in power.

However, officials said, the administration does want to see evidence of a leadership transition plan being put in place in Iraq.

Vice President Joe Biden spoke with the Iraqi leader Wednesday and emphasized the need for him to govern in an inclusive manner. Biden also spoke to Iraq’s Sunni parliamentary speaker and the president of Iraq’s self-ruled northern Kurdish region.

Al-Maliki, who has long faced criticism for not making his government more inclusive, went on a diplomatic offensive Wednesday, reaching out in a televised address to try to regain support from the nation’s disaffected Sunnis and Kurds. His conciliatory words, coupled with a vow to teach the militants a “lesson,” came as almost all Iraq’s main communities have been drawn into a spasm of violence not seen since the dark days of sectarian killings nearly a decade ago.

Secretary of State John Kerry said that the situation in Iraq is about more than just al-Maliki.

“Nothing that the president decides to do is going to be focused specifically on Prime Minister Maliki,” Kerry said in an interview with NBC that aired Thursday. “It is focused on the people of Iraq – Shia, Sunni, Kurd.”

The U.S. withdrew the last American troops from Iraq in late 2011 after more than eight years of war. The withdrawal came after Washington and Baghdad were unable to reach an agreement to extend the U.S. troop presence there.

But faced with a growing Sunni insurgency, Iraq’s government has asked the U.S. to launch airstrikes to contain the fast-moving militant group that has seized Mosul, Tikrit and other towns in Iraq as the country’s military melted away.

Obama’s decision-making on airstrikes has been complicated by intelligence gaps that resulted from the U.S. military withdrawal from Iraq in late 2011, which left the country largely off-limits to American operatives. Intelligence agencies are now trying to close gaps and identify possible targets that include insurgent encampments, training camps, weapons caches and other stationary supplies, according to U.S. officials.

Beyond airstrikes, the White House has been considering plans to boost Iraq’s intelligence about the militants. Officials have said that additional U.S. forces that could be brought into Iraq to train local security forces could also assist in identifying possible targets for strikes.

Obama discussed his options Wednesday with congressional leaders, who told him they do not believe he needs authorization from Congress for some steps he might take to quell the al-Qaida-inspired insurgency.