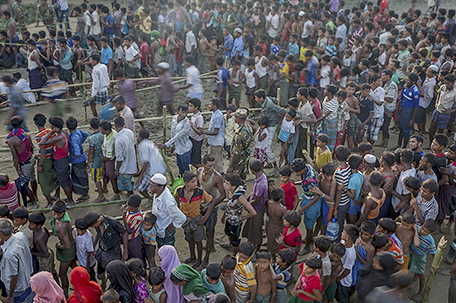 ABOVE PHOTO:  In this Sept. 25, 2017, file photo, Rohingya Muslims, who crossed over from Myanmar into Bangladesh, wait to receive aid during its distribution near Balukhali refugee camp, Bangladesh. International aid group Doctors Without Borders said Thursday, Dec. 14, 2017, its field survey has found at least 6,700 Rohingya Muslims were killed between August and September in a crackdown by Myanmar’s security forces. About 630,000 Rohingya have fled Myanmar into Bangladesh to escape what the United Nations has called “ethnic cleansing.” (AP Photo/Dar Yasin, File)

WASHINGTON — Secretary of State Rex Tillerson said last Friday the U.S. plans to impose sanctions on at least one person responsible for the crackdown on Myanmar’s Rohingya Muslims, a significant U.S. policy shift after years of rolling back economic restrictions on the Southeast Asian nation.

Tillerson did not say who would be hit by the sanctions and when, but as early as next week the Trump administration is expected to announce designations under a U.S. law that allows targeted sanctions on foreign individuals for human rights violations and corruption. Such designations lead to seizure of U.S. assets and exclusion from the U.S. financial system.

Starting in 2012, Washington progressively eased broad economic and political sanctions to reward Myanmar’s shift toward democracy after decades of direct military rule. While re-imposition of sweeping restrictions on trade and investment is not in the cards, the U.S. threatened last month to punish officials from the military or other security forces responsible for the crackdown that has prompted 630,000 refugees to escape to neighboring Bangladesh.

The U.S. has called the violence “ethnic cleansing.” Myanmar denies it, saying its “clearance operations” that triggered the exodus did not target civilians. It says security forces were responding to attacks by Rohingya militants on security forces in August.

Tillerson told reporters at the United Nations in New York the U.S. is continuing to assess what happened.

“We want Myanmar’s democracy to succeed,” Tillerson said. “This particular crisis is a real test of whether they are going to be able to affect a successful journey to democracy.”

He said the U.S. has already identified one individual responsible for the crackdown and is examining other possible individuals for targeted sanctions.

Tillerson also stressed the importance of a free press. He called for the immediate release or information about two Reuters news agency journalists arrested this week for possessing “important secret papers” obtained from two policemen who had worked in Rakhine state — the region the Rohingya have fled from.

Myanmar said Wednesday the journalists, Wa Lone and Kyaw Soe Oo, and the policemen will be charged under the country’s colonial-era Official Secrets Act, which carries penalties of up to 14 years in prison.

The Rohingya have long faced persecution in Myanmar, which regards them as illegal immigrants from Bangladesh although many have lived in Myanmar for generations.