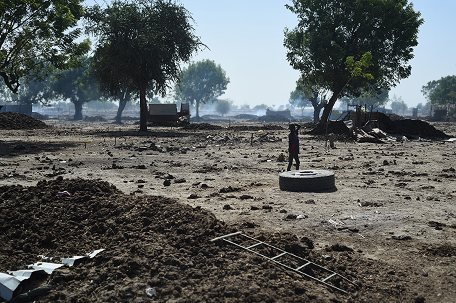 ABOVE PHOTO:  A child walks through the ruins of Leer town in South Sudan’s Unity state on Tuesday Dec. 15 ,2015. Leer, the hometown of rebel leader Riek Machar, has been sacked at least three times during the war. Tuesday marked the two year anniversary of South Sudan’s civil war.  (AP Photo/Jason Patinkin)

JUBA, South Sudan— South Sudan’s president and a rebel leader both merit sanctions because their troops have targeted civilians and broken international law, a U.N. panel of experts says in a new report obtained by The Associated Press.

The report also calls for an arms embargo on the oil-rich but economically devastated country where the U.N. says tens of thousands have been killed since fighting broke out in December 2013.

The panel of experts found that despite a peace deal signed by President Salva Kiir and rebel leader Riek Machar in August, human rights violations, including torture, sexual violence, extrajudicial killings and the recruitment of child soldiers, have continued “unabated and with full impunity.”

“There is clear and convincing evidence that the majority of acts of violence committed in the course of the war … has been directed by or undertaken with the knowledge of senior individuals at the highest levels of government and within the opposition,” the report says.

The new report portrays the civil war as competing tribes locked in a fight for political power and personal gain.

In one incident in October, about 50 men were taken by government-affiliated forces and killed, with their bodies dumped by a road. U.N. personnel “located and photographed the bodies, already in an advanced state of decay, nine days later,” the report said.

The panel found Machar to be implicated in similar acts, but it noted that the rebels have faced significant challenges due to their inability to acquire enough ammunition.

The report makes clear that both sides have continued to pursue arms from abroad.

As of mid-December, the government had at least three attack helicopters and was waiting for the delivery of another from a Ukrainian company, Motor Sich, the report says. And the panel said it had evidence indicating that as of mid-September, South Sudan’s government was trying to arrange payment for another four attack helicopters from a Uganda-based company, Bosasy Logistics.

The opposition has received ammunition and arms from neighboring Sudan, the report says.

The U.N. Security Council has repeatedly threatened to take further action against those who stand in the way of peace in South Sudan, but has been blocked by opposition from Russia and Angola.