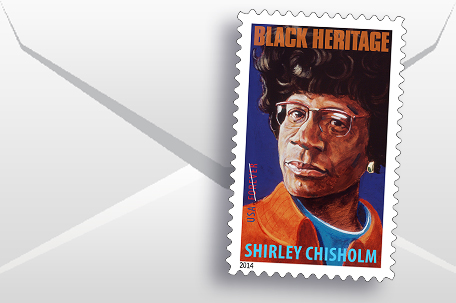 The Shirley Chisholm Black Heritage Forever Stamp goes on sale today at Post Offices nationwide, online at usps.com/stamps, at the Postal Store on eBay at ebay.com/stamps, and by calling 800-STAMP24 (800-782-6724).

“Shirley Chisholm was a courageous and pioneering woman whose legacy lives on with the issuance of this special stamp,” said Deputy Postmaster General Ronald Stroman. “We are proud to honor this great American who shattered barriers of race and gender. Shirley Chisholm fought for the rights of women and the poor as a true champion for justice and equality for all.”

Joining Stroman to dedicate the stamp were several dignitaries including former U.S. Ambassador Andrew Young and many other federal, state and local officials. A tribute video was shown during the ceremony, featuring quotes from Ambassador Young and others who knew and worked with Chisholm, and were influenced by her contributions to America.

The Shirley Chisholm stamp was designed by art director Ethel Kessler and features a color portrait of Chisholm by artist Robert Shetterly. Painted in acrylic on wood, the portrait is one of a series of paintings by Shetterly titled “Americans Who Tell the Truth.”

Born Shirley Anita St. Hill in Brooklyn, NY, on Nov. 30, 1924, the future politician was the child of Caribbean immigrants. Her mother was a seamstress from Barbados, and her father was a factory worker from Guyana. She spent part of her childhood in Barbados with her maternal grandmother, where she attended strict, traditional, British-style schools. A talented student, St. Hill graduated from Brooklyn College in 1946 and began work in early childhood education. She advanced quickly from a teacher’s aide to a consultant for New York City’s Division of Day Care. While pursuing a graduate degree at Columbia University, she met and married Conrad Chisholm. All the while, she stayed involved in local politics. In 1964, Chisholm’s political career took off in earnest with her election to the New York State Assembly.

In 1968, Chisholm ran for Congress. She campaigned in her Bedford-Stuyvesant neighborhood in Brooklyn with a sound truck that announced, “Ladies and gentlemen… this is fighting Shirley Chisholm.” A maverick who was not beholden to the traditional Democratic party machinery, Chisholm’s campaign motto was “Unbought and Unbossed.” She won the election and entered Congress in 1969, the first black woman ever to do so. Regarding her historic win, Chisholm later remarked, “That I am a national figure because I was the first person in 192 years to be at once a congressman, black and a woman, proves, I think, that our society is not yet either just or free.”

Chisholm scored another historic first in 1972 when she declared her candidacy for the Democratic nomination for President — the first African-American to seek the nomination of a major political party. Despite paltry financial resources, Chisholm’s enthusiastic supporters, who included women, minorities, and young people, got her on the ballot in fourteen states. She received more than 150 delegate votes at the Democratic National Convention before George McGovern won the party’s nomination.

She later wrote of her unsuccessful bid, “The next time a woman runs, or a black, or a Jew or anyone from a group that the country is ‘not ready’ to elect to its highest office, I believe that he or she will be taken seriously from the start… I ran because somebody had to do it first.”

Chisholm served in Congress until 1983. She continued to speak out for the rights of women, people of color, and the poor, fighting for legislation to support daycare centers and provide federal aid for education. She was also a founding member of the Congressional Black Caucus and the National Women’s Political Caucus. She was a co-founder of the National Organization of Women (NOW). After retiring from politics, Chisholm taught at Mount Holyoke College, wrote, and lectured. She died on Jan. 1, 2005, having already spoken of her legacy. “I’d like them to say that Shirley Chisholm had guts,” she said. “That’s how I’d like to be remembered.”

The Shirley Chisholm stamp is being issued as a Forever Stamp. Forever stamps are always equal in value to the current First-Class Mail one-ounce rate.

Customers may view the limited-edition Shirley Chisholm Black Heritage Forever Stamp, as well as a preview of many of this year’s other stamps, on Facebook at facebook.com/USPSStamps, on Twitter @USPSstamps or on the website USPSstamps.com.