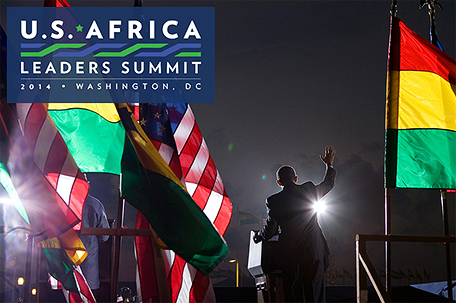 President Barack Obama welcomed leaders from across the African continent to the nation’s capital for a three-day U.S.-Africa Leaders Summit, the first such event of its kind. This Summit, the largest event any U.S. President has held with African heads of state and government, builds on the President’s trip to Africa in the summer of 2013 and will strengthen ties between the United States and one of the world’s most dynamic and fastest growing regions. Specifically, the August 4-6 Summit advances the Administration’s focus on trade and investment in Africa and highlights America’s commitment to Africa’s security, its democratic development, and its people. At the same time, it highlights the depth and breadth of the United States’ commitment to the African continent, advances our shared priorities, and enables discussion of concrete ideas to deepen the partnership. At its core, this Summit is about fostering stronger ties between the United States and Africa.

The Civil Society Forum event will be convened by Secretary of State Kerry and will bring together U.S. and African government leaders, members of African and U.S. civil society and the diaspora, and private sector leaders to focus on strategies for fostering social entrepreneurship, civic innovation, and development.

The Investing in Women, Peace, and Prosperity event will highlight the importance of African women’s leadership and meaningful participation in government, the economy, and civil society — as a means to accelerate economic development, improve health and educational indicators, advance democratic development, and improve the safety and security of all citizens.

The Resilience and Food Security in a Changing Climate event will highlight three critical and interrelated areas in the U.S-Africa relationship: food security, climate change, and resilience. These issues are of particular concern for African nations, where the majority of rural populations rely on rain-fed agriculture, and where climate change is already having a major affect.  More productive agricultural systems will help transform lives, communities, and nations by generating income and by freeing resources for rural populations to participate elsewhere in the economy.

The Combating Wildlife Trafficking event will be an opportunity for African leaders to join together and share their ideas on how to best counter the threat of poaching and inspire African youth to safeguard their natural heritage for future generations.

AGOA Forum: To further demonstrate our commitment to sustainable economic growth and development in Africa, U.S. Trade Representative Michael Froman will host the African Growth and Opportunity Act (AGOA) Ministerial at the World Bank. African and U.S. trade officials will discuss the future of the AGOA program and U.S. plans to pursue renewal of AGOA legislation.

Capitol Hill Reception: The Senate Foreign Relations and House Foreign Affairs Committees will host a welcome reception for African leaders on Capitol Hill in the afternoon.

White House Dinner on the occasion of the U.S.-Africa Leaders Summit: On the evening of August 5, President Obama and the First Lady will host a dinner at the White House for African heads of state, and government and select guests.

Summit Leader Meetings:  African leaders and President Obama will engage in dialogue in three action-oriented sessions that will address issues of shared interest and mutual concern.

Leader Session II – Peace and Regional Stability:  A working lunch will be centered around shared concerns regarding peace and security, including a discussion of long-term solutions to regional conflicts, peacekeeping challenges, and combating transnational threats.

Leader Session III – Governing for the Next Generation:  This session will allow for a candid conversation about the greatest challenges and opportunities for Africa’s continued political and economic progress and a specific focus on governance. This session will focus on how to enhance governance in order to deliver services to citizens, attract and prepare for increased domestic and foreign direct investment, manage transnational threats, and stem the flow of illicit finance.

Spousal Program:  On August 6, First Lady Michelle Obama, in partnership with former First Lady Laura Bush and the Bush Institute, will host a day-long spouses symposium at the Kennedy Center focused on the impact of investments in education, health, and public-private partnerships.