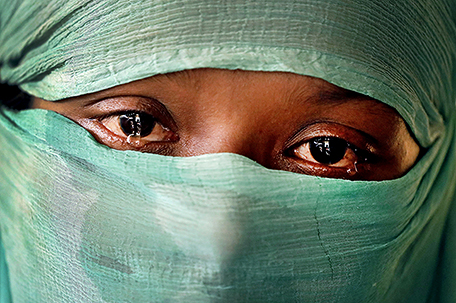 ABOVE PHOTO:  F, 22, who says she was raped by members of Myanmar’s armed forces in June and again in September, is photographed in her tent in Kutupalong refugee camp in Bangladesh. The use of rape by Myanmar’s armed forces has been sweeping and methodical, the AP found in interviews with 29 Rohingya Muslim women and girls now in Bangladesh. They were interviewed separately, come from a variety of villages in Myanmar and now live spread across several refugee camps in Bangladesh. The military has denied its soldiers raped any Rohingya women. (AP Photo/Wong Maye-E)

UKHIA, Bangladesh — The use of rape by Myanmar’s armed forces has been sweeping and methodical, The Associated Press found in interviews with Rohingya Muslim women and girls now in Bangladesh.

They were interviewed separately, come from a variety of villages in Myanmar and now live spread across several refugee camps in Bangladesh. Yet their stories were hauntingly similar. The military has denied its soldiers raped any Rohingya women.

The accounts were told by 21 women and girls. They agreed to be identified in this story by their first initial only, out of fear the military will kill them or their families.

WHEN WILL I HAVE PEACE?

H was reciting the sunrise prayer at home in late August with her husband and six children when she heard a commotion outside.

A dozen soldiers burst through her door and started beating her husband. They grabbed three of her children by their feet, carried them outside and bashed them against trees, killing them.

Her husband screamed, and H ran out of the house. As she fled, she heard gunshots behind her. She never saw her husband again.

She made it with her three other children to the nearby hills, where other women from her village were hiding. But soldiers descended upon the women and dragged them away to rape them.

They ripped off H’s clothes, took her jewelry and tied her hands behind her back with her headscarf.

One man held her head and hands back, while another held her legs. The third raped her. Then they switched. All three men raped her.

Her crying children refused to leave her side during the assault. The soldiers slapped them, kicked them, tried to shove them away. They refused to budge.

When the soldiers finished, her 8-year-old daughter tried to cover her naked body with her torn clothing.

It took her and her children four days to reach Bangladesh.

I BURN INSIDE FOR MY CHILDREN

When seven soldiers stormed into the house in October, 2016, S’s husband fled. The soldiers began beating her parents.

A soldier beat S with his gun, ripped two of her babies from her arms and dropped them on the floor. They tore the clothes off S, her mother and several other young women in the house, and took S’s earrings and money she had hidden in her clothes.

Two soldiers took S to a field. They covered her mouth with their hands to stop her screams. They held her down and raped her.

When it was over, she hid in the hills but eventually returned home.

In August, S was at home with her family when the military began firing rocket launchers at houses, setting them ablaze. Her husband and two eldest children fled, but she stayed behind to pack up her baby girls and a few belongings. One baby was in a swing, the other sleeping on the floor.

A rocket launcher hit the house. The babies went up in flames before her eyes.

There was nothing she could do. So she ran. She hid with the rest of her family in the hills for several days before making the 3-day trek to Bangladesh.

“I burn inside for my children, but what can I do?” she asks. “They burned to death. I guess that was my destiny.”

SHE TOLD NO ONE

The military surrounded N’s village one early morning in late August. Around 18 soldiers stormed her house, and dragged N outside with her sister-in-law and mother-in-law.

The women were taken to the center of the village, where soldiers robbed them of their jewelry.

Three men then took her to the hills and stripped her naked. Two men held down her hands while a third raped her. Then they switched positions. All three raped her.

During the attack, they showed her their knives and beat her. She was too frightened to fight back.

When it was over, they left her there. She returned home and told no one about the rape.

She was in agony after the assault and bled for eight days.

SHE SAW HER VILLAGE BURNING

There was no warning before five soldiers suddenly stormed into 16-year-old S’s house one morning in early August.

They searched the home for money and valuables. Then they slashed her husband’s neck, killing him. The men briefly left to ransack other neighboring houses, before returning.

Two soldiers pulled her into a room, snatched her 3-month-old son from her arms and put him on the floor. They searched her clothes for valuables and took her earrings. Another three men came in and began to beat her with guns while the others stripped off her clothes.

One soldier held down her hands, and another put his gun in her mouth. All five men raped her.

When she struggled, they beat her. She could hear her baby crying and was terrified the men would kill him.

When they were finished, they let her get dressed and then dragged her bleeding body outside to the center of the village. Soldiers were dragging other women they had assaulted out of surrounding houses. The men beat S and the other women again, then left them.

S ran back to her house, grabbed her baby and ran. As she fled, she saw soldiers lining men and boys up and shooting them. When she made it to the hills, she looked down and saw her village burning.

SHE NEVER SAW HER SON AGAIN

The soldiers had been harassing T’s family for days: Showing up and stealing their food, urinating in their rice, hitting T and, once, stripping off her clothes.

And then one morning in mid-August, five men dragged her husband out of the house, where they slashed his neck. They grabbed her 10-year-old son and dragged him outside; she never saw him again. Her 12-year-old daughter managed to flee.

The soldiers took off T’s earrings and nose ring, then stripped off her clothes. When she screamed, they kicked her.

Then they pinned her to the floor. Two men held her while the first man raped her. Then they switched. One man put a gun in her mouth to silence her screams.

Afterward, she bled for two days. Months later, her back still hurts from the attack.

When they finished, they ate the food in her kitchen and stole her chicken and duck. They also dragged away the body of her husband.

She ran into the hills and found her daughter and father. They tried to find safety in neighboring villages, but the military kept showing up. With nowhere to go, they headed toward Bangladesh.

ALL I HAVE LEFT ARE MY WORDS

N’s husband was walking down a road in late August when several villagers saw soldiers grab him and drag him into the hills. Later that day, children in the hills came upon his head, along with several other corpses. Soldiers were milling around near the bodies.

N stayed in her house with her 8-year-old daughter for the next few days, unable to stop crying. Then suddenly, around 80 soldiers descended on the village. Five soldiers came to her door and shouted: “Who’s inside?”

N was terrified. The men barged in.

One man held her as she screamed and fought. They covered her eyes with tape, and hit her head with a gun. Two held her in place while three others began rifling through her clothing. There was nothing for them to steal; she’d already hidden her valuables.

They ripped her clothes off and beat her in the head with a gun until she blacked out. When she awoke, her vagina was swollen, bleeding and covered in sores. She had clearly been raped; by how many men, she does not know.

She was in too much pain that day to leave the house. She and her daughter fled the next day for Bangladesh. She bled for eight days, and three months later still has trouble urinating.

“I have nothing left,” she says, blinking back tears. “All I have left are my words.”

[You can read the rest of the Rohingya women’s interviews at https://apnews.com/afs:Content:1645500373/I-was-in-immense-pain]