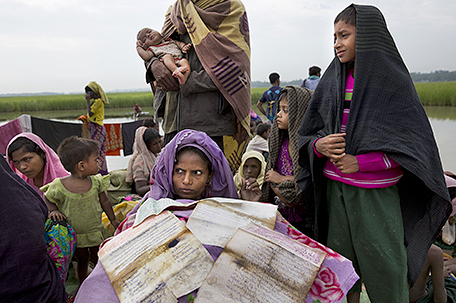 ABOVE PHOTO:  A Rohingya woman who fled persecution in Myanmar tries to dry her land documents that got wet as she waits along the border for permission to move further towards refugee camps near Palong Khali, Bangladesh, Thursday, Nov. 2 2017. More than 600,000 Rohingya from northern Rakhine state have fled to Bangladesh since Aug. 25, when Myanmar security forces began a scorched-earth campaign against Rohingya villages. (AP Photo/Bernat Armangue)

UKHIA, Bangladesh — The use of rape by Myanmar’s armed forces has been sweeping and methodical, The Associated Press found in interviews with Rohingya Muslim women and girls now in Bangladesh.

They were interviewed separately, come from a variety of villages in Myanmar and now live spread across several refugee camps in Bangladesh. Yet their stories were hauntingly similar. The military has denied its soldiers raped any Rohingya women.

The accounts were told by 21 women and girls. They agreed to be identified in this story by their first initial only, out of fear the military will kill them or their families.

She is only 13, but R had already learned to fear the military men. Last year, she says, soldiers stabbed her father to death.

One day in late August, 10 soldiers barged into R’s house. They snatched her two little brothers, tied them to a tree and beat them.

R tried to run out the front door, but the men caught her. They tethered her arms to two trees. They ripped off her earrings and bracelets, and stripped off her clothes.

R screamed at them to stop. They spit at her.

Then the first man began to rape her. The pain was excruciating. All 10 men forced themselves on her before she passed out.

R’s older brothers carried her toward the border. Once in Bangladesh, a doctor gave her emergency contraceptives.

R desperately misses her little brothers, and her sleep is plagued by nightmares. She struggles to eat.

Before the rape, she says softly, she was pretty.

F and her husband were asleep at home in June when seven soldiers charged into their bedroom. The men bound her husband with rope and gagged him with a scarf they ripped from F’s head.

They yanked off F’s jewelry and stripped off her clothes. They threw her to the floor, where the first soldier began to rape her.

Her husband wriggled the gag from his mouth and screamed. One soldier shot him, and another slit his throat.

After the assault, the men dumped F’s naked body outside her home and set it on fire. The neighbors rescued her. Two months later, she realized she was pregnant.

In September, her nightmare began again. F was asleep at a neighbor’s house when five soldiers broke down the door.

The soldiers slashed the throat of the 5-year-old boy who lived there and killed his father. They stripped off the women’s clothes. Two men raped F, and three men raped her friend.

After the men left, the women lay on the floor for days before fleeing for Bangladesh.

Despite everything, F is determined to love the child.

“HER HUSBAND BLAMED HER”

K and her family were settling down to breakfast one morning in late August when they heard the screams of other villagers outside. Her husband and three oldest children bolted out the door.

But K was nearly 9 months pregnant and had two toddlers to watch. She couldn’t run anywhere.

The men barged in, threw her on the bed, yanked off her jewelry and stole the money she had hidden in her blouse. They ripped off her clothes and tied down her hands and legs with rope. When she resisted, they choked her.

And then they began to rape her.

She was too terrified to move. One man held a knife to her eyeball, one a gun to her chest. Another forced himself inside her. Then they switched places. All three men raped her.

She began to bleed and was certain her baby was dying.

When she awoke, the men had gone. Her husband blamed her for the assault, admonishing her for not running away.

“I  WAS IN IMMENSE PAIN”

R was at home in late August with her husband and five of her six children when she heard a commotion outside. She saw houses going up in flames in her village.

Her husband ran out, but she had the children to take care of.

Five soldiers barged into the house. Her children screamed and ran outside.

The men stripped off her clothes, took her necklace and kicked her in her back with their knees. Then one of the men began to rape her, while the other four held her down and hit her with their guns. When it was over, they took money and her husband’s clothes from the wardrobe.

She fled to Bangladesh with her family the next day. She struggled to move with her injuries, and had to use a walking stick.

“I was in immense pain,” she says, pausing to take a long breath at the memory. “It hurt so much to walk through the hills.”

A was at home praying with her four children in late August when about 50 soldiers surrounded her village and opened fire on the men.

A began to shake; she had heard of soldiers raping women in other villages.

Three men burst into her house and told her to get out. She refused. They beat her.

Her children screamed. The soldiers slapped them, then threw them out of the house.

Two of the soldiers hit her until she fell. One pressed his boot against her chest, pinning her down. They took off her jewelry and stripped off her clothes.

Then all three raped her, punching and kicking her when she screamed. One pressed a knife to the back of her neck, making her bleed. She still bears a faint scar.

After the attack, she bled so heavily she thought she was dying. A farmer told her that her husband had been shot to death, so her brother, mother and daughter helped her make the painful trek to Bangladesh.

“They wanted to wipe us out from the world,” she says of the military. “They tried very hard, but Allah saved us.”

In the first few days after the attack, she cried all the time. Now she cries silently in her mind.

THE BABY GIRL WAS DEAD

M was at home feeding her son rice in late August when a bullet from the military blasted through the bamboo wall of her house and struck her teenage brother.

Her husband and children ran out of the house. But M was 8 months pregnant, and did not want to leave her brother behind. For two days, she stayed by his side, until he died.

Soon after, four soldiers charged into her house.

They began slapping and punching her. Three soldiers dragged her outside the house, stripped her and beat her. When she screamed, they put a gun in her mouth.

The first man began to rape her, while the other two held her down and punched and kicked her pregnant belly.

After the second rape, she kicked them so ferociously, they finally left.

M felt intense cramping in her belly. She gave birth that night at home. The baby girl was dead. M buried the infant in an unmarked grave by her house.

Her husband returned, and they made the three-day walk through the hills to Bangladesh.