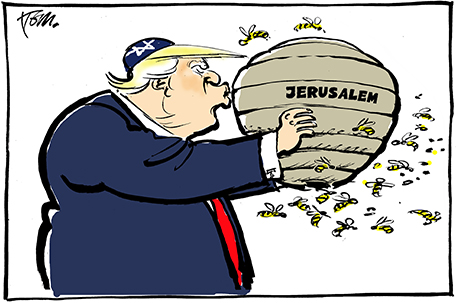 ABOVE PHOTO:  Tom Janssen, The Netherlands

Although officials said Trump would again delay action on his oft-repeated campaign promise to move the U.S. Embassy in Israel to Jerusalem from Tel Aviv, his decision to recognize Jerusalem as Israel’s capital risks infuriating the Muslim world, and potentially sparking protests that could fray American alliances in the world’s most volatile region.

Trump administration officials cast the president’s announcement as a simple acknowledgement of the “historical and current reality” of Jerusalem, which Israel effectively controls but whose status has been contested for centuries. But any presidential pronouncement, even couched as Trump’s personal opinion, breaks from Washington’s painstakingly maintained position of neutrality, which has held that the city’s ultimate fate must be determined through Israeli-Palestinian negotiation.

Ahead of Trump’s White House speech, Arab and Muslim leaders spoke about the potential for violence. In Gaza, hundreds of Palestinian protesters burned American and Israeli flags. They also waved Palestinian flags and banners proclaiming Jerusalem as their “eternal capital,” language that Israelis similarly use.

Even America’s closest allies in Europe questioned the wisdom of Trump’s radical departure from past U.S. positions. Trump faced a deadline this week on whether to move the U.S. Embassy to Jerusalem, not on stating his view or his nation’s on whether Jerusalem should be considered the Israeli capital.

U.S. officials who previewed Trump’s address said his recognition of Jerusalem wouldn’t compromise the city’s geographic and political borders, which would still have to be determined by Israel and the Palestinians. Trump also isn’t eliminating the possibility of Palestinians realizing their aspiration of establishing east Jerusalem as the capital of a future nation, said the officials, who weren’t authorized to be quoted by name and briefed reporters on condition of anonymity.

Almost all of Israel’s government agencies and parliament are in Jerusalem, not Tel Aviv, where the U.S. and other countries maintain embassies, the officials explained. Other officials familiar with internal administration talks in recent weeks cite another powerful motivation for the president: his desire to fulfill his campaign pledge in some form to reflect Israel’s strong sense of ownership of Jerusalem.

To that end, officials said Trump will instruct the State Department to begin a multiyear process of planning the move to a Jerusalem embassy. That order effectively buys Trump time as he continues the practice of his predecessors, who similarly waived the U.S. legal requirement to establish a Jerusalem embassy for more than two decades on national security grounds.

But the declaration of Jerusalem as the capital is a powerful symbolic step in its own right. The United States has never endorsed the Jewish state’s claim of sovereignty over any part of Jerusalem and has seen the city’s future as indelibly linked to a comprehensive Arab-Israeli peace agreement. Trump’s son-in-law, Jared Kushner, has been trying to restart a new peace process.

Jerusalem includes the holiest ground in Judaism. It’s also home to Islam’s third-holiest shrine and major Christian sites, and any perceived harm to Muslim claims to the city has triggered protests in the past, in the Holy Land and beyond.

Saudi Arabia’s King Salman, one of several Arab leaders to speak to Trump this week, warned the U.S. leader Tuesday that declaring Jerusalem as Israel’s capital “would constitute a flagrant provocation to all Muslims, all over the world.” Palestinian President Mahmoud Abbas and Jordan’s King Abdullah II warned Trump specifically on any embassy move. British Prime Minister Theresa May said she planned to call Trump to discuss her country’s support for a two-state solution.

Secretary of State Rex Tillerson on Wednesday insisted the Trump administration sees “a very good opportunity” to achieve Middle East peace. Speaking to reporters in Brussels, he urged people to “listen carefully” to Trump’s speech, and said the president is “very committed” to an Israeli-Palestinian deal.

Tillerson and Defense Secretary Jim Mattis have been described by officials as two of the top national security advisers who have urged caution in talks with Trump. They said Trump has been receptive to some of the concerns.

The president isn’t planning to use the phrase “undivided capital,” according to the officials. Such terminology is favored by Israeli officials, including Prime Minister Benjamin Netanyahu, and would imply Israel’s sovereignty over east Jerusalem, further enraging the Palestinians.

America’s consulate in Jerusalem has ordered U.S. personnel and their families to avoid visiting Jerusalem’s Old City or the West Bank, and urged American citizens in general to avoid places with increased police or military presence.

“This would mean they decided, on their own, to distance themselves from efforts to make peace,” Khaldi told The Associated Press. He said such recognition would lead the Palestinians to eliminate contacts with the United States.