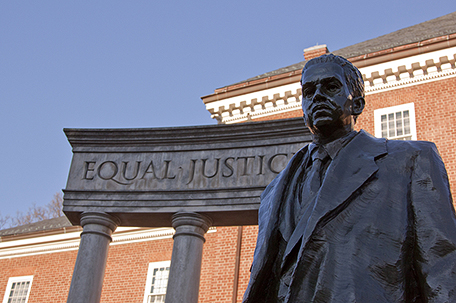 ABOVE PHOTO:  Bronze memorial statue of Thurgood Marshall, the first African American appointed to the U.S. Supreme Court in 1967 in Lawyers’ Mall across from the Maryland State House in Annapolis, MD.  (Copyright: Glynnis Jones /Shutterstock)

Thursday, July 2, on what would be Thurgood Marshall’s 107th birthday, the Thurgood Marshall Center Trust screened the documentary film, Pardons of Innocence: The Wilmington 10. Pardons of Innocence recounts the turbulent history of desegregation from the late 1960s to 1971 as protestors fought for equal education for students of North Carolina’s New Hanover Public Schools.

Following the movie, a distinguished group of panelists discussed the film against the backdrop of the range of social and racial issues that is riling the United States.

About Thurgood Marshall: Marshall holds a special place in African-American history. Before he became this country’s first black Supreme Court justice, he forged a stellar legal career as a lawyer, judge and Civil Rights activist.

In 1936, Marshall became the NAACP’s chief legal counsel and founded the NAACP Legal Defense Fund four years later where he served as its first Director-Counsel. He was the key strategist and one of the lead attorneys in the decades-long effort to end racial segregation, and litigated a series of cases that would ultimately topple the pillars of segregation. As NAACP counsel, Marshall used the judiciary to bring about equality for African Americans, in an effort to ensure that blacks enjoyed all the rights and privileges of other Americans.

He argued “separate but equal” cases twice before the US Supreme Court in 1952 and 1953 and successfully challenged the law that legitimized “separate but equal” facilities for blacks and whites. In 1954, he and the NAACP legal team won the landmark Brown v. Board of Education case, as the US Supreme Court ended racial segregation in public schools.

He was the first African American appointed to the US Supreme Court in 1967 by President Lyndon Johnson and retired as Associate Justice in 1991.