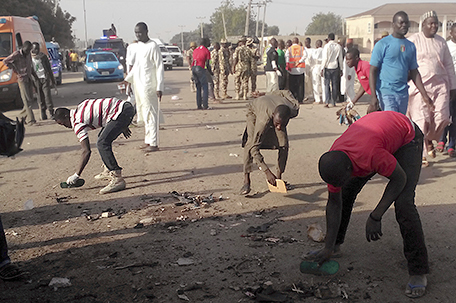 The civilian fighters who work alongside the army challenged the girls as they approached a village near Madagali town, local council chairman Yusuf Muhammad Gulak told The Associated Press. The girls began running at the checkpoint and the fighters shot the girl in the lead, activating her explosives and killing her and a companion, he said. The third girl tried to flee and was gunned down, Gulak said.

Army spokesman Maj. Badare Akintoye confirmed the shootings, adding: “Our soldiers are on alert and commercial activities are going on” at the targeted market.

Soldiers and civilian fighters have stopped many suicide bombers before they can reach heavily populated targets in recent months. But two women suicide bombers killed 57 people and wounded 177, including 120 children, last month at Madagali market, 20 kilometers (12 miles) from the scene of Wednesday’s shootings.

Boko Haram has used scores of women and girls as young as 7 in suicide bombings that have killed hundreds this year. Some of the bombers are suspected to have been previously kidnapped.

A multinational force of troops from Nigeria and its neighbors has driven the Islamic extremists from most of the towns and villages where they had declared a caliphate to help create an Islamic state in Nigeria, a country of 170 million people divided almost equally between Muslims and Christians.

Nigeria’s president declared that Boko Haram had been crushed last month, but there’s unlikely to be a swift end to the suicide bombings and attacks on remote villages and army outposts.

Boko Haram’s 7-year-old Islamic uprising has killed more than 20,000 people, driven 2.6 million from their homes and created a massive humanitarian crisis that the U.N. says has 5.1 million people facing starvation.