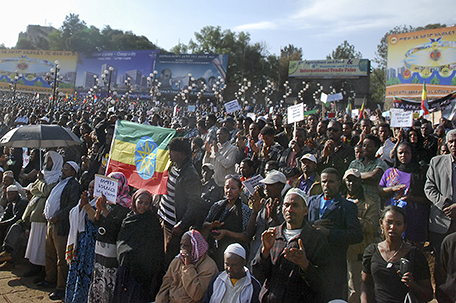 ABOVE PHOTO:  Thousands of people attend a government-supported gathering to protest the recent killing of many Ethiopian Christians in Libya by the Islamic State extremist group, at Meskel Square in Addis Ababa, Ethiopia Wednesday, April 22, 2015.  (AP Photo)

ADDIS ABABA, Ethiopia — More than 100,000 Ethiopians on Wednesday protested the killing of Ethiopian Christians in Libya and their own government’s failure to raise living standards of the poor, with poverty fueling the flow of migrants through dangerous areas.

The government-supported march at Addis Ababa’s Meskel Square turned violent as stone-throwing protesters clashed with the police, who arrested at least 100 people.

The protesters said “We want revenge for our sons blood,” referring to Ethiopians seen being beheaded or shot in a video released on Sunday by the extremist group Islamic State. The Ethiopian victims are widely believed to have been captured in Libya while trying to reach Europe.

Ahaza Kassaye, the mother of one of the victims identified as Eyasu Yikunoamlak, told The Associated Press during the protest Wednesday that she was overwhelmed by the massive turnout.

“I’m happy now. I’m very happy. I was just mourning the death of my son with family members and my neighbors. I never expected this to happen,” she said.

Ahaza, who had to seek shelter in a cafe when the protest turned violent, said she hoped the government would react to the killings by closing all illegal border crossings and arresting suspected human traffickers.

Even as the Islamic State killings have roiled many here, some young people in Addis Ababa said they they would still attempt the perilous journey to Europe, often via Sudan and then Libya, if they had enough money to cover the smugglers’ fees.

Ethiopian Prime Minister Hailemariam Desalegn said that, while poverty was the root cause of the migrations, smugglers were to blame for encouraging poor people to pursue what he called “the death journey.”

Ethiopian lawmakers on Tuesday were debating a possible response to the Islamic State killings, but it remains unclear if military action is an option. The government has announced three days of nation-wide mourning over the killings.

At summit, Obama aims to broaden world approach to extremism