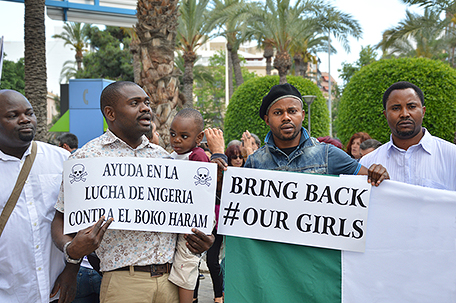 KANO, Nigeria — A 13-year-old says her father gave her to Boko Haram extremists and that she was arrested after refusing to explode a suicide bomb in Kano, Nigeria’s second largest city in the north.

Nigeria has suffered numerous suicide bombings in recent months carried out by girls and young women. That has raised fears that the insurgents are using kidnapped girls.

The girl told a news conference Wednesday night that she saw many people being buried alive at the Boko Haram camp where her father took her in Bauchi state, east of Kano.

She said her captors asked if she wanted to go to paradise and, when she said yes, explained she would have to be a suicide bomber.

When they threatened to kill her, she allowed them to strap her into a vest primed with explosives, saying “I was afraid to be buried alive.”

Two other girls detonated their bombs at Kano’s textile market on Dec. 10. Police said the attack killed four people and wounded seven, including the girl.

Thousands of people have been killed and 1.6 million driven from their homes in the 5-year-old uprising to create an Islamic state in Nigeria, Africa’s most populous nation of 160 million people divided between mainly Muslims in the north and Christians in the south.

Police Superintendent Adenrele Shinaba said the girl was arrested in the hospital with a leg wound. A taxi driver took her to the hospital, and she said she left her suicide vest on the seat. The driver alerted police.

Shinaba said she will remain in custody while investigations continue. He said they had been unable to find her father, who the girl said belongs to Boko Haram.