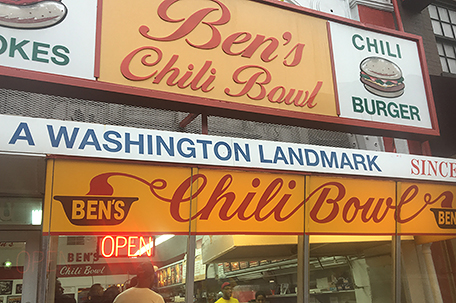 For nearly 60 years, Ben’s Chili Bowl has been one of the few things that both Washington’s residents and tourists have been able to count on. 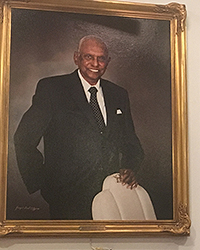 One of the first things that you notice when you walk into Ben’s Chili Bowl on U Street are the pictures.

Lining the walls of the iconic restaurant located on what once was Washington, D.C.’s “Black Broadway” theater district are pictures of the famous and the not-so-famous that have come through its doors.

There’s a large picture of the late founder Ben Ali smiling in his kitchen. There are photos of his wife Virginia with various people including Democratic presidential candidate Hillary Clinton. The Rev. Jesse Jackson sent an autographed photo of he and the Rev. Dr. Martin Luther King once he noticed that the only representation of the civil rights leader at the restaurant that played host to planning meetings for civil rights actions was a painting in the back room.

There’s a picture of Elvis Presley is on the wall. So is Bono, lead singer of the band U2. Denzel Washington spent time here while filming The Pelican Brief. Comedian Bill Cosby is the only person allowed to eat at Ben’s for free. 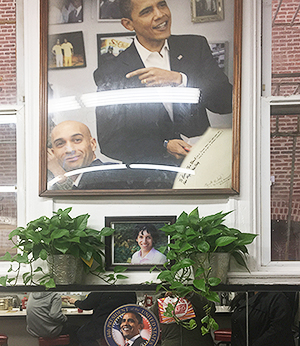 There are no strangers here. Which is important in the ultimate political company town.

“We have an atmosphere that welcomes everybody,” said Sonya Ali, a member of the Ali family, which still owns the restaurant. “The reason why we’ve managed to stay open for nearly 60 years despite the changes in the neighborhood is because we have such loyal customers. We’re a restaurant museum of sorts.”

Located at 1213 U Street, Ben’s Chili Bowl has been a staple of the neighborhood once known as the “Black Broadway” theater district, said Sonya Ali, one of Ben and Virginia’s daughters-in-law.

When he was a student at Howard University, Ben, a native of Trinidad, was looking for a taste of home, Ali said.

“He grew up eating spicy foods,” she said. “He was looking for a taste that was close to what he ate at home. The closest he could get in America was chili. He saw that it was a favorite and learned how to make it.”

So in 1958, Ben and Virginia bought a building that had at one time been a pool hall and a silent movie theater and turned it into what is now Ben’s Chili Bowl. The chili went on everything. Hot dogs. Hamburgers. French fries.

These days, you can also get turkey burgers, sandwiches, salads, rice bowls and even vegetarian options, Ali said. 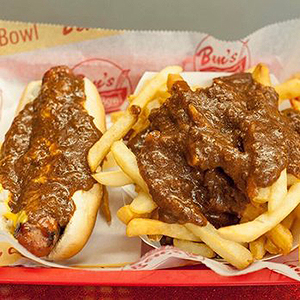 But what Ben’s Chili Bowl is best known for is the iconic half-smoke.

“We have kind of put the half smoke on the map,” Ali said. “It’s a half beef/half pork sausage that we’re known for here in DC.”

Over the years, Ben’s has expanded.

Next door to the original Chili Bowl is Ben’s Next Door, a sit-down restaurant where you can get chicken and waffles, shrimp and grits and other Southern fare. On H Street, near another Chili Bowl location, is Ben’s Upstairs, a rooftop restaurant that serves Southern and Caribbean fare. There are also Chili Bowl locations in Arlington and Reagan National Airport.

But Ben’s Chili Bowl probably wouldn’t have remained on U Street or have been given the chance to expand if people didn’t like the food.

So while covering the National Action Network’s “We Shall Not Be Moved” march, SUN correspondent Amy V. Simmons and I stopped by Ben’s to grab some lunch and get out of the cold.

First of all, the coffee was great. For a pair of reporters, that’s a big deal.

When she took a bite of her chili and rice, Amy smiled. It was good, but not too spicy, which is important.

When I bit into the half-smoke, it snapped. That’s the hallmark of any good grilled sausage. The juiciness of the half-smoke combined with the chili, mustard and onion was really tasty. The only thing that could have made it better was some cheese, but I’ll ask for that next time.

The chili fries were crunchy and stood up well to the chili. They didn’t get soggy and didn’t need a lot of seasoning. The chili was quite enough.

We both decided to order dessert. Amy enjoyed her lemon cake, saying it was moist and not too sweet. The red velvet cake I had was, well, okay. It was good, but it wasn’t going to make me forget the red velvet at Denise’s in North Philadelphia. (Then again, few things could.)

In a city and a neighborhood that’s changed a lot, Ben’s Chili Bowl has been a constant, said SUN sports columnist Chris Murray, who used to work at a paint store nearby.

“It’s a cool place, the last of the family-owned mom and pop restaurants of Black Washington D.C.,” he said. “It was a place where we used to go after hanging out late at night. It’s an institution.”

The Philadelphia Sunday Sun’s coverage of the 2017 Inauguration was sponsored by the following: Prof. Kim Pearson, Colety Bain, Sheila Green Hoffler, The Phelan E. Smith Foundation and readers like you.