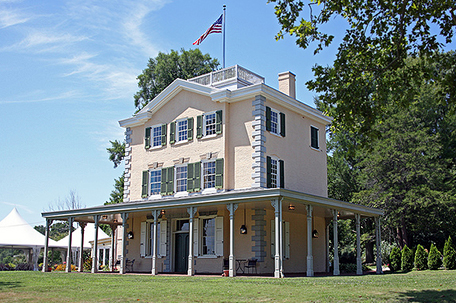 The Belmont Mansion is not just beautiful, it’s also rich in history. In 1986, despite its rich history, the Belmont Mansion found it’s way from the the City’s demolition list. That’s when the American Women’s Heritage society, under the leadership of Audrey Johnson-Thornton, raised over $3million to save and renovate the Mansion.

The property was built in 1742 by William Peters, who was a lawyer and management agent for William Penn’s family. The property was later passed down to his son, Judge Richard Peters, the first non-Quaker to be a member of he Pennsylvania Society for the Abolition of Slavery. Judge Peters would serve as the Secretary of the Board of War for the Revolutionary Army and a Pennsylvania Delegate to Congress, and later, the Speaker of the Pennsylvania Assembly and a Pennsylvania State Senator. As an abolitionist, Judge Peters purchased, freed and hired Cornelia Wells, a slave who lived nearby. Peters also published her freedom papers on the public record, a notable act, to avoid questions about her freedom. The Belmont Mansion, and the Peters family, would go on to be apart of the Underground Railroad.

Now, almost 30 years after the property was rescued by the work of Thornton, the Belmont Mansion is going through a transition of leadership. Now under the direction of Naomi Nelson, The Belmont Mansion is focusing on “using the Underground Railroad as a model for diversity training, cooperation, and conflict resolution.”

Nelson has worked in the non-profit and museum community for more than 25 years. Prior to becoming the President of the Board of Trustees for the Underground Railroad Museum at Belmont Mansion, she served as the Vice President of Museum Programs at the National Underground Railroad Freedom Center (Freedom Center) in Cincinnati, Ohio for four years.  She left that position to become the Director of Grants at Gloucester County College (GCC) where she was responsible for overseeing the submission of more than $4 million dollars in grant applications each year. During her time at GCC, the college received more than $2 million dollars in grants each year.

Nelson has also taught museum studies and art history at Pratt Institute in Brooklyn and Lincoln University, where she currently serves as an adjunct art historian. All of this experience is guiding the way that Nelson plans on leading the Belmont Mansion into the next era.

“There are many lessons from the stories of the Belmont Mansion, and former slaves like Cornelia Wells, who was purchased from a neighboring slave owner by Judge Peters and later freed. The work of the abolitionist movement and the Underground Railroad that are still relevant, and can be used to resolve issues African Americans are facing today”, Nelson said.

Nelson’s focus is on education and engagement. The Mansion has several programs that educate the community about the history of the Underground Railroad and the Belmont Mansion including partnerships with Global Leadership Academy Charter School and the Franklin Institute.

Through the partnership with Global Leadership Academy, the museum provides lessons during the academic year through the school’s social studies and history curriculum to students. The mansion also offers a historic reenactment summer camp that is open to all and internships for Lincoln University students.

“The goal is to provide more opportunities to educate the community beyond the museum tours”, said Nelson.

The Belmont Mansion also has a new addition, The Cornelia Wells Conference Center and Banquet Hall that can be rented for meetings, conferences, weddings and more. After Cornelia Wells was freed by Judge Peters she went on to become an entrepreneur, selling soda and ginger cakes from her home. Her remarkable story, as well as her entrepreneurial spirit and connection to the Belmont Mansion is why the American Women’s Heritage named the new space after Wells.

Additionally, the Belmont Mansion hosts the Underground Railroad Legacy Series. The series provides a platform for contemporary voices through a multidisciplinary approach including arts and culture performances, keynote speakers and more. “We want to continue to build our relationship with the community, not just our immediate neighbors, but also the community at large.”

“I grew up in this neighborhood”, Nelson said. “My brother would bring me to play at the Belmont Mansion, so being the executive director is full circle for me. We want people to know that the Belmont Mansion is here, and that we want to work with the community. It’s a jewel many people don’t know about.”

The Belmont Mansion offers tours Tuesdays-Fridays from 11am-5pm (no reservation required) and on Saturdays by appointment. For more information about the Belmont Mansion, and their upcoming event schedule visit www.belmontmansion.org