The Story Of A People 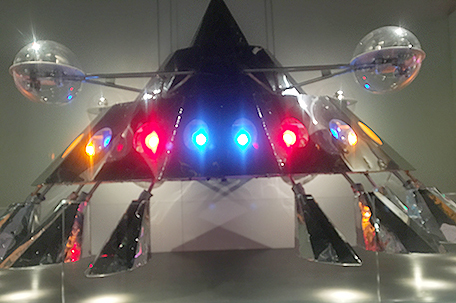 From a South Carolina slave cabin to the Mothership used by Parliament-Funkadelic in it’s concerts, the National Museum of African American History uses a collection of priceless artifacts to detail the Black experience in America.

That was the first word that popped into my head when I got out of the cab that brought me to the National Museum of African American History and Culture in Washington, D.C. on Wednesday.

Spread out over five-acres of land near the Washington Monument at 1400 Constitution Ave. (corner of 14th and Constitution), the majestic, rust colored building with wrought iron grating gives you an idea of what awaits you inside with its size.

The Smithsonian held a press preview of the NMAAHC before its grand opening next Saturday. Reporters from around the country and we would walked through the museum’s 12 exhibits, talked to museum curators, and saw many of the 37,000 artifacts that will call the museum home.

While construction of the museum began four years ago (the ground breaking was held in 2012), the National Museum of African American History and Culture is actually the culmination of a 100-year effort, said Michelle Wilkinson, co-curator of the exhibit that opens your experience entitled, “A Century In The Making”.

In 1916, Black soldiers who fought in the Civil War came to Washington to ask for a memorial to their sacrifice for the country, Wilkinson said. They successfully lobbied Congress for the enabling legislation, but life intervened, Wilkinson said.

“In 1929, legislation was passed to begin designing and erecting such a museum,” she said. “But the Great Depression hit, the funding wasn’t there and the efforts just languished.”

While people kept trying, (there was even an unsuccessful attempt made in the 90s) it wasn’t until 2003 that the legislation enabling the creation of a museum on National Mall was passed, Wilkinson said.

The 400,000 square foot museum includes a theater (named for major benefactor Oprah Winfrey), a welcome center, and the Sweet Home Café, whose food offerings I’ll be sharing with you next week. About $315 million in private funds were raised to build the museum.

Divided into “History” and “Culture,” the museum tells the true story of the African American experience through artifacts, research and interactive exhibits that allow visitors to imagine themselves in various situations.

For example, there’s a replica of the lunch counter in Greensboro, North Carolina where civil rights activists sat down in defiance of the Jim Crow laws that kept them from being able to enjoy a hamburger. The counter contains a row of video screens that give you a series of scenarios that allow you to work out where you would have fit in during the Civil Rights Movement.

Now I’m going to come right out and tell you that I didn’t get to see everything at this museum in one day…and you’re probably not going to be able to either. When I talk about how large and expansive the National Museum of African American History and Culture is, I’m not using hyperbole. It’s big. And there’s a lot to see.

But the exhibits that I did get to check out were interesting, well put together, and featured things that you may be seeing for the first time ever.

When you get on the elevator to head to the first floor of the museum’s “History” section, pay attention to the elevator’s side windows. You’ll notice that it starts with “today” and takes you down from year to year until you reach the 1400s.

Once you get out of the elevator, you begin traveling through a fairly expansive history of the institution of slavery.

Seeing how slavery figured into the world economy kind of smacks you upside the head. For many countries– Portugal being the most prominent– turning people into property was big business, and business was good. Portugal sold more than 5 million people in its heyday.

You also see the shackles that slaves were buckled into as they were transported for sale. You see bills of lading and receipts that show the transaction that turned people into property. A slave cabin from town in South Carolina illustrates the homes slaves lived in.

Leading into the section where the cabin is located, there’s a statue of Thomas Jefferson surrounded by slaves with a quote from the Declaration of Independence above it. Behind him is a series of bricks with the names of all of the slaves that Jefferson, one of America’s Founding Fathers, owned while he was crafting documents that serve as the nation’s governing documents.

There was also a, literal, auction block and a flyer advertising a slave auction.

That these things are included in the museum was no accident, said the exhibit’s curators, Mary Elliott and Nancy Bercaw. While the story of slavery is a rough one, it’s one that has to be told.

“We wanted to present the unvarnished truth,” Elliott said. “This is an American story and it’s important to shine a light on it.”

But while the “history” part might heavy for some, the “culture” part showcases what African Americans have been able to do to make the most of their existence in this country and how the country, and by extension the world has benefited from it.

“Sports: Leveling the Playing Field,” which details the history of African Americans in sports, counts among it’s artifacts boxing gloves, head gear and a robe belonging to the late Muhammad Ali, the leotard that Gabby Douglas wore when she became the first Black woman to win the Individual All-Around Gold Medal in Olympic gymnastics, and the football jersey of NFL Hall of Famer and activist Jim Brown.

The part that African Americans have played in the military is also spotlighted at the museum through the “Double Victory” exhibit. Included here is the uniform that Ret. Gen. Colin Powell wore when he was the Chairman of the Joint Chiefs of Staff.

From fashion (RunDMC’s world-famous Adidas are here), to music (my personal highlight was being able to see one of the Parliament-Funkadelic Motherships the band used in their concerts), to even a detailed history of African American expressions of camaraderie and dismissal (“throwing shade,” contrary to rumor, is not a new thing) the Culture sections of the museum showcase the ways that African Americans have influenced the consciousness.

The National Museum of African American History and Culture is worth the trip and the time to see. And while you probably won’t get through it in one day, the time you spend will teach you something.

Because of the high level of interest, the museum is implementing a timed pass system. You can get the passes for free, and if you come in person, possibly the same day. Pass reservations for November and December are already being taken.

To reserve your passes, go to http://event.etix.com/ticket/e/1004039/timed-entry-pass-washington-national-museum-of-african-american-history-and-cultures. Admission is free.