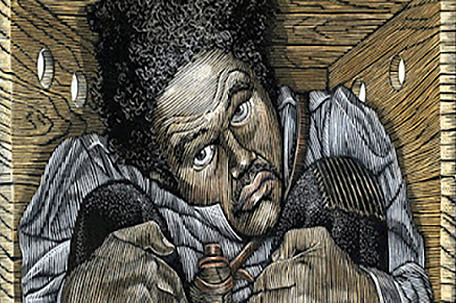 ABOVE PHOTO: Henry Box Brown, slave who mailed himself to freedom.

Henry “Box” Brown was born in 1815 as a slave in Louisa County, Virginia. Later, he and his family were sold to a plantation in North Carolina. In 1849, he became a free man by putting himself in a box and mailing himself to freedom.

Brown had the idea of shutting himself up in a box and getting himself conveyed as dry goods to a free state. To carry out his plan, he required the help of a fellow church choir member who was a free Black man, as well as a sympathetic white shoemaker, in order to aid with his passage to Philadelphia.

Brown folded himself in a wooden rectangle about 3-by-2 feet wide and 2.5 feet high with three small holes for air. His co-conspirators nailed the box shut and carried the box to the offices of the Adams Express Company. It was a very unfavorable 27-hour trip. “I felt a cold sweat coming over me that seemed to be warning that death was about to terminate my earthly miseries,” he once wrote.

When Brown finally arrived in Philadelphia, he was ferried to the office of a Quaker merchant and abolitionist. Afterward, he was nicknamed “Box,” and thereafter used the name Henry “Box” Brown. As a free man Brown was an anti-slavery lecturer and after the Fugitive Slave Law of 1850 was passed, he moved to England, where became an actor and magician.