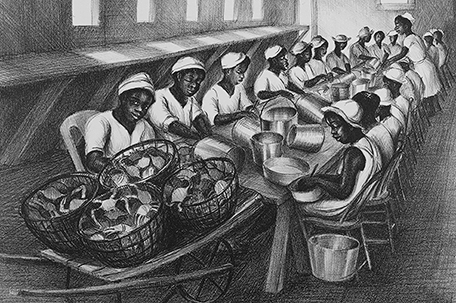 BALTIMORE–Clarence DeShields is looking at something in the distance, and every curve, hollow and wrinkle on his expressive face is a testament to his complex inner life.

You wouldn’t describe him as handsome, exactly, if only because he has endearingly oversized ears. But his eyes never flinch. He’s not quite smiling, but his lips lift up at one end as if to better take in what he’s seeing. He looks like someone who has gone through a trauma but has emerged on the other side with his humanity intact.

A viewer walks away from the lithograph (on display now at the Reginald F. Lewis Museum of Maryland African American History & Culture) with the impression that DeShields was a man worth knowing, someone with a story to tell and wisdom to impart.

Because DeShields was African American and lived on Maryland’s Eastern Shore, it’s surprising to realize that he was dignified with a portrait in 1931, when the Ku Klux Klan was running rampant throughout the South. It’s also startling to learn that the artist who created this penetrating and affectionate depiction wasn’t a family member or close friend of DeShields, but a wealthy white woman named Ruth Starr Rose. 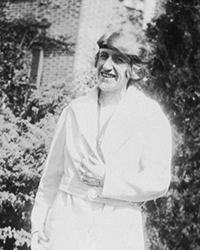 This photo released by the Reginald F. Lewis Museum in Baltimore, shows a 1915 photograph of artist Ruth Starr Rose. An exhibition of her work opened at the museum on Oct. 10, 2015. Rose described her artwork in a speech as “the very insignificant struggle of one human being against a world of ignorance and hate,” and added: “The very little I have been able to do is only the smallest dent in the steel wall of the caste system.” (Reginald F. Lewis Museum via AP)

In a speech that she wrote around 1930, Rose described her artwork as “the very insignificant struggle of one human being against a world of ignorance and hate,’’ and added: “The very little I have been able to do is only the smallest dent in the steel wall of the caste system.’’

This lithograph is one of nearly 90 oil paintings, prints, photographs and historic documents on display in the new exhibit, “Ruth Starr Rose (1887-1965): Revelations of African American Life in Maryland and the World.’’

The show, which opened last Thursday, has been described as the first wide-ranging public display of Rose’s work. The exhibit also provides a rare glimpse into life in the early 20th century in the black communities of Copperville and Unionville in Talbot County, which were created for African American veterans who fought for the Union during the Civil War.

Roughly half of the items on display are painstaking portraits of the black crab pickers, sailmakers, soldiers and children who were the artist’s employees and neighbors. Many of the artist’s subjects are thought to be descended from such illustrious Americans as the Underground Railroad conductor Harriet Tubman and the abolitionist Frederick Douglass, though the connections to specific individuals still are being established. Douglass was enslaved for a time at Wye House, the Talbot County plantation located about one mile from Rose’s home, Hope House.

“People say that I’m from one of Maryland’s founding families,’’ said the exhibit’s guest curator, Barbara Paca, who is descended from the family that gave Baltimore’s Paca Street its name.

“I hope that this exhibition makes the case that we should start extending those honorary titles to some African-American families. America didn’t just happen because a bunch of white guys wrote the Declaration of Independence. Black families founded this country, too.’’

The exhibit also includes Rose’s illustrations of traditional spirituals, which were described by African-American art history pioneer James A. Porter as the most comprehensive visual interpretation of these hymns to appear in the U.S. Finally, the show includes artworks of religious rituals that Rose painted on her international travels, from a Mexican First Communion celebration to Haitian voodoo rituals to a Navajo fire dance.

Rose experiments with different styles throughout the exhibit, from hyper-realistic portraits to Impressionist landscapes to the folk art-influenced illustrations of the hymns, in which the artist daringly inserts black prophets and angels.

She was born in 1887 into a wealthy family of noted abolitionists and free-thinkers. Her father was a timber baron; her mother studied with the composer Clara Schumann and wrote a two-volume history of Caribbean gardens; her work on the book included a visit to a leper colony.

After graduating from Vassar College, Rose began taking classes at the Art Students League of New York, where she became part of a close group of progressive, left-leaning artists and intellectuals. The show documents Rose’s friendship as an adult with such cultural icons as singer Paul Robeson and actor Orson Welles.

Her works were included in group shows featuring such visionaries as Pablo Picasso, Marc Chagall, Salvador Dali and Georgia O’Keeffe, and she had a solo show at the Baltimore Museum of Art in 1933.

But, since Rose’s death in 1965, she has fallen into obscurity, possibly because she was a woman artist with an unorthodox subject matter.

“I kept running into curators who described her art as `amateur’ and `saccharine.’ They asked, ‘Why do you want to look at the art of a rich white woman making fun of black people?’ I didn’t understand that reaction. I kept working to rediscover Rose, despite the art world’s collective foot-dragging.’’

Baltimore interior designer Jeffrey Moaney grew up with the adult incarnations of some of the children Rose painted. It was a revelation for Moaney to see his grandfather, great-uncle and great-aunts as children. He marvels at how well Rose captured the essential personalities of his ancestors at such a young age.

The smile on the face of the toddler sitting in the high chair, that’s the same grin that Moaney saw radiating from the face of his irrepressible grandfather Richard. Great-uncle Bernard, painted as a young boy, clutches a hunting rifle and a duck decoy, a sport he pursued for his entire life. And Moaney’s great-aunts Ruth and Pauline (known as “Paul’’) display the same sweet nature as little girls that they possessed as grown-ups when they turned their house into a gathering spot for the extended family.

“These paintings are just beautifully executed,’’ Moaney said. “The artist depicted the sitters in such a respectful way. That was especially unusual given the time period.’’

Rose’s subject was considered radical, Paca said, because portraits traditionally celebrated aristocrats and the upper echelons of society who could afford the commissions, not workaday African Americans.

On the rare occasions when black people were depicted in popular culture, they were nearly always drawn as stereotypes or caricatures, or were shown in the role of comic minstrels entertaining white audiences.

Though Rose’s decision to explore the intrinsic humanity of a near-invisible segment of society was courageous, her boldness was not without limits. Paca notes that the artist shied away from creating work that overtly protested racism. In this, Rose differed from such contemporaries as Prentiss Taylor, who depicted Jesus as African American, or Harry Sternberg, who portrayed a lynching.

“She was so focused on positive representations of African Americans,’’ Paca said. “She just couldn’t cross that line. Is that a strength or a weakness? I don’t know.’’

But the exhibit makes the point that in the 1930s, treating African Americans as equals was a subversive act. The show includes photographs of several mixed-race social gatherings at Hope House, including one in which the artist is leaning in a relaxed and confidential manner toward an African-American man seated next to her.

A text block points out that Rose is thought to have been the first white artist to create an artwork for a black church. The artist sought feedback from African American congregants when she was illustrating the spirituals, and altered her pieces to reflect their concerns.

“The things that she did were dangerous things to do, and there was an inherent activism in her artwork and in her choices,’’ Paca said.

The curator is pleased that after the exhibit leaves the Lewis, a condensed version will go on view at the Armory, 40 S. Harrison St., Easton.

“Ruth Starr Rose worked to create shared communities at a time that was much more difficult than what we’re facing now,’’ Paca said. “We can all benefit from her story.’’