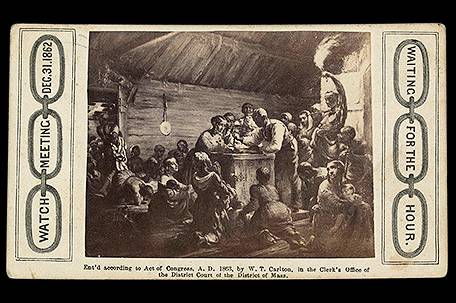 ABOVE PHOTO: Waiting for the Hour

As people the world over celebrated the arrival of the new year—2014—another quieter, less visible tribute, filled with deep yearning, was also taking place—the 151st Watch Night service, or Freedom’s Eve. The first watch took place on New Year’s Eve 1862, when enslaved men, women, and children gathered to see with their own eyes the dawn promised by President Abraham Lincoln’s Emancipation Proclamation, when they would be “thenceforward, and forever free.” With every passing hour, they joined in asking “How long, Watchman, how long?”   It means a great deal that congregations of African Americans and others, in churches and homes across the land, continue the New Year’s Eve watch these 151 years, asking “How long, Watchman, how long?”

Much has been written about Lincoln and the Civil War with its legal ending of the barbaric economic system of ownership of other human beings. And further strides towards justice were propelled by the great Civil Rights movement.  Yet, it is clear that racism and economic inequality continue to be rampant today.  Is there an answer? YES!

Aesthetic Realism, the education founded by the great philosopher and poet Eli Siegel explains the cause and answer to racism, and I want everyone to know it!

How should we see people? — “our personal civil war”

The deepest desire of every person, Aesthetic Realism teaches, is to like the world on an honest basis. But the desire for contempt—the feeling we add to ourselves by making less of something else—is attractive to everyone. And this desire for contempt, Eli Siegel explained, is the cause of racism and every human injustice, from a child’s sarcastic taunt or “put down,” to lying, bullying, economic exploitation, and war.  Contempt is the cause of all racial injustice, from the dehumanization of slavery and lynching, to the everyday forms of ethnic slurs, humiliation, voter suppression, and the vicious cycle of the “cradle to prison” pipeline which minority youth are experiencing–a form of cultural annihilation.

The enormous, ongoing interest in the Civil War and civil rights history is evident in books and movies—for instance, Lincoln, 12 Years a Slave, and Fruitvale Station—and apps for mobile devices which send daily historical real-time updates. That is because the conflict between contempt and respect brings up a question Aesthetic Realism sees as central in every person’s life: How should we see people?  In her commentary on the Civil War, in the international periodical The Right of Aesthetic Realism to Be Known, #916, Ellen Reiss writes definitively:

The great cause of the Civil War—despite Southern fakery on the subject—was slavery. And slavery is a form—utter, elemental—of man’s seeing man with contempt: it is the epitome of the feeling, You are less; I do not have to see you as real; and I have pleasure looking down on you…. And the fight, Shall I see the world and people with contempt or respect? is the fight within every individual right now; it is our constant, inward, personal civil war.

I am convinced that racism will end when every one of us studies contempt in ourselves and learns, as I am so grateful to be learning, that there is a greater pleasure: the pleasure of respect, of seeing that we are more through wanting to know and be fair to the outside world. Poetry is a means of our seeing this.

The first Watch Night, poetry, and the answer to racism (part two)