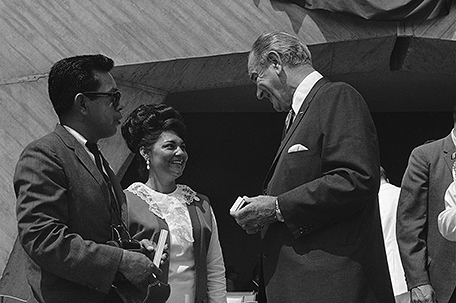 ABOVE PHOTO:  President Lyndon B. Johnson presents a souvenir pen to Mr. and Mrs. Lupe Arzola, in 1968 in Washington, during the signing of the Fair Housing Act outside the Department of Housing and Urban Development. The Arzolas were residents of the oldest federally subsidized public housing project in Austin, Tex. (AP Photo)

“Jobs are harder to create than voting rolls. The eradication of slums housing millions is complex far beyond integrating buses and lunch counters.”

–From “Where Do We Go from Here: Chaos or Community?”

The year had been full of setbacks for the Johnson administration, from the disastrous Tet Offensive in Vietnam to the dismal findings of the Kerner Commission Report, followed by the assassination of Dr. King on April 4th and the riots that followed.

The embattled president, who announced he wouldn’t seek a second term prior to King’s death, seized upon the solemnity of the moment to try to repair his damaged legacy and address this unfinished civil rights business. Congress had previously pushed back against then Sen. Walter Mondale’s legislative efforts to address fair housing. But a Congress that was also deeply affected by King’s assassination, moved the Civil Rights Act of 1968 — which included the Fair Housing Act — out of committee and passed it.

“Now, with this bill, the voice of justice speaks again,” Johnson said at the signing ceremony. “It proclaims that fair housing for all who live in this country is now a part of the American way of life.”

According to the U.S. Department of Housing and Urban Development (HUD), Title VIII of the Civil Rights Act of 1968 (also known as the Fair Housing Act) prohibits discrimination in the sale, rental and financing of dwellings based on race, color, religion, sex or national origin.

On the local level, this Act has played a major supporting role when it comes to the work of many of Philadelphia’s community and civil rights advocates over the years.

“The Fair Housing Act has been critical to Project HOME’s ability to provide housing,” said Sister Mary Scullion, the organization’s director.  “In our early years, we were part of a precedent-setting fair housing lawsuit that went all the way to the Third Circuit Court of Appeals, eventually clearing the way for our 1515 Fairmount residence. That victory, after five years of legal and on-the-ground struggle, sent a powerful signal to the City of Philadelphia about the importance of fair housing.”

Angela McIver, board secretary and CEO of the Fair Housing Rights Center in Southeastern Pennsylvania, emphasized the continued importance of making sure that people know that the Fair Housing Act and the remedies it codifies are available to them.

“Title VIII is still in effect,” she said. “Step one is knowing this.”

Many of the issues African-Americans struggle with are tied to housing security.

“While we have made progress in the past 50 years, we must continue to expand housing equity in our city, particularly the availability of safe and affordable housing for lower-income residents,” Landau continued.

Over the past the 50 years, legislation reinforcing the original intent of the Act has been introduced and passed. 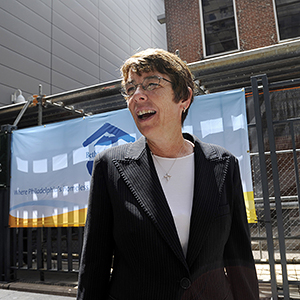 But while the law remains in place, it hasn’t been flawlessly enforced.

Recently, a report from the Center for Investigative Journalism showed that although African-American homeownership rose by almost 6 percentage points after the Fair Housing Act was instituted in 1968, the gains were totally reversed between 2000 and 2015.

Fair housing issues were especially put to the test as a result of the subprime mortgage scandal in 2008, causing a historic loss of wealth for African-Americans.

“They lost the greatest asset they had available…it was a chance to transfer wealth,” McIver of the Fair Housing Rights Center said.

This downward trend has been exacerbated by; low credit scores, long-term unemployment, underemployment and other mitigating factors.

That said, even those African-Americans who have a high credit score and a healthy- sized down payment are being steered away from purchasing properties in certain areas, reintroducing the pre- Fair Housing Act practice of redlining into the equation.

According to Merriam Webster, the legal definition of redlining is the illegal practice of refusing to offer credit or insurance in a particular community on a discriminatory basis (as because of the race or ethnicity of its residents).

The Center for Investigative Journalism report also highlighted the fact that in 2016, African- American applicants in Philadelphia were 2.7 times as likely to be denied a conventional home mortgage as White applicants.

“The most pressing issue was revealed through their research. They were able to convert [what we knew] intuitively into fact…this practice was outlawed in 1968, yet we’re finding it in 2018,” McIver said. “It has a cascading effect.”

“This is not a time to weaken protections,” she said.

The main key to combating housing discrimination is a combination of knowledge and action. Citizens must know what their housing rights are in order to pursue justice if they are challenged or violated.

“The importance for all of us is understanding what those rights are, and protecting these rights.” McIver said.