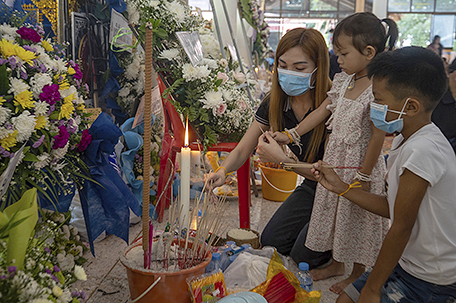 ABOVE PHOTO: Paweenuch Supolwong, 3, the only child to emerge unscathed from the mass killing attack at the day care center, and her mother Anonpai Srithong, 35, join a Buddhist ceremony inside Wat Rat Samakee temple in Uthai Sawan, north eastern Thailand, Saturday, Oct. 8, 2022. A former police officer burst into a day care center in northeastern Thailand on Thursday, killing dozens of preschoolers and teachers before shooting more people as he fled. (AP Photo/Wason Wanichakorn)

UTHAI SAWAN, Thailand — Paweenuch Supholwong sits on her mother’s lap and fidgets with her pigtails as her mother tells the remarkable story of how the 3-year-old wisp of a girl survived Thailand’s worst mass killing — the only child to emerge unscathed from a day care after a former police officer massacred preschoolers while they napped.

Two dozen children were among the 36 people shot and slashed to death in an attack that shattered the serenity of the rural township of Uthai Sawan, robbing the small farming community of much of its youngest generation in the blink of an eye.

Paweenuch was deeply asleep and covered by a blanket on the floor when the attacker burst through the front door and killed 22 of her classmates who lay around her — apparently missing her because he thought she was already dead, her mother Panomplai Srithong said.

Another child survived with serious injuries and remains hospitalized.

As the community has come together to share its grief at the scene of the attack and its Buddhist temples, people have also flocked to Paweenuch, tying dozens of white, yellow and red “soul strings” to her wrists in the hope it will help her also spiritually survive the horror, in the belief that when someone suffers such a tragedy, they lose part of their soul.

“It is to bring the spirit back into her body,” Panomplai explained, holding her daughter warmly. “It’s like the spirit had left the body and it is being called back.”

Uthai Sawan’s 6,500 people are spread across a dozen villages, living in homes scattered among the sugar cane fields and rice paddies that many of them farm. The township in northeastern Thailand was named for two smaller communities merged together administratively, with Uthai meaning “rising sun” and Sawan meaning “heaven” or “happiness” in Sanskrit.

Ninety-two of the township’s preschool-aged children attended the public day care center, which is next to the government’s administrative offices and across from a sugar cane field. But flooding from seasonal monsoon rains, a mechanical failure that kept the center’s school bus from working and other factors kept many away on Thursday when the gunman attacked.

The township has about 100 more preschool-aged children who either go to private care centers or stay at home, said Nanticha Panchom, the teacher who runs the day care.

Nanticha, 43, was in the center’s kitchen cooking the children lunch when she heard the first shot from outside — police say it was the attacker shooting a man and a child in front of the building. She heard someone else yell to lock the front door and she ran out to get help.

“I never thought he would go inside,” she said as she looked across the driveway to the single-story building now adorned with flowers and other tributes to those killed.

She bleakly wondered whether any children would ever return to the day care, and what the killing of the others will mean for the township of about 1,900 households.

“I can’t even imagine what this lost generation will mean to this community,” Nanticha said.

Police identified the shooter as Panya Kamrap, 34, a former police sergeant fired earlier this year because of a drug charge involving methamphetamine. After leaving the day care, he killed others along the way, and then his wife, child and himself at home, police said. An exact motive has not been determined, but he was due in court the following day to answer for the drug charge.

Like many from the area, Tawatchi Wichaiwong came to the scene Saturday from a neighboring village with his wife, sister-in-law, and three young nephews to place flowers at the memorial outside the day care.

“We felt it across all the villages. I cried when I heard the news,” the 47-year-old sugar cane farmer said. “We all have children of similar ages, we all know each other.”

For a township where people are used to simple and peaceful daily lives, the attack came as a particular shock, said Chuanpit Geawthong, a senior local administrator who was born and raised in Uthai Sawan.

“We’ve never encountered anything like this. Even during the COVID crisis, we did not lose anybody,” she said. “This is something felt by all of us — there’s no one not affected, we’re all connected families.”

The 52-year-old works in the district office building next door to the day care center and said she frequently popped over to help out and see the children, who called her “grandma.”

Chuanpit was in the outdoor restroom when she heard the shots fired, and ran out to see a man lying under a table suffering from a gunshot wound and rushed to his aid. He is recovering at a hospital, but a man who worked at the district office was killed, she said.

It’s the loss of the children that she is having the hardest time coming to terms with.

“It’s almost impossible for someone here not to be affected by this — if the victim wasn’t your child, your grandchild, your family member, it’s someone you know,” she said.

“Our community has been so happy, it is such a lovely place, and the perpetrator has damaged its future. These kids could have grown up to be anything, a member of parliament or even prime minister,” Chuanpit said.

Thailand’s government is providing financial compensation to the families to help them with funeral costs and other expenses — at least 310,000 baht, which is about $8,300 and for many amounts to several months’ salary, if not more, in one of the country’s poorest provinces.

The government also quickly dispatched a team of trauma experts from Bangkok who linked up with local mental health professionals on the day of the attack to help the victims.

Team leader Dutsadee Juengsiragulwit, a doctor with the government’s department of mental health, said a small community like Uthai Sawan has the advantage in that its size gives it a social cohesion that can be a source of power in dealing with such a tragedy.

On the other hand, she said since almost everyone is affected in some way, there are no “undamaged” people who can support others, so it is important for professionals to provide help quickly.

Panomplai Srithong and her husband were at work in a Bangkok electronics factory when they heard that their daughter’s day care had been attacked and that no one had survived.

Like many from Uthai Sawan, they had moved to the capital for work and send home money to their family, leaving 3-year-old Paweenuch in her grandmother’s care.

After an initial panic, they learned that their daughter had survived and they drove hme to Uthai Sawan as quickly as possible.

“Breathing was difficult, I can’t describe it, but when I found out my child survived I was relieved,” Panomplai said. “But I also wanted to know if she had any injuries, if there was any collateral damage.”

She said from what her daughter has told her, she had been asleep under her blanket turned toward a wall and she doesn’t seem to have seen or heard the attack. Rescue workers carried her out of the building with her eyes covered so she didn’t see the grisly scene.

She did ask her grandmother about where her best friend was, and she told her that her friend “has passed.”

“That’s when she found out that her friend died,” Panomplai said. “This was the person who was sleeping next to her.”

Panomplai’s adult cousin was killed outside the day care, and she attended a temple service Saturday for him and other victims.

“There’s both good luck hidden in bad luck — I’m lucky that my child is okay but I lost my cousin,” she said.

“For other people, some lost an only child who was their hope,” she said, shaking her head in disbelief.