‘Terror at the Mall,’ documentary on siege of Westgate Mall in Nairobi, Kenya, premieres on HBO, Sept. 15 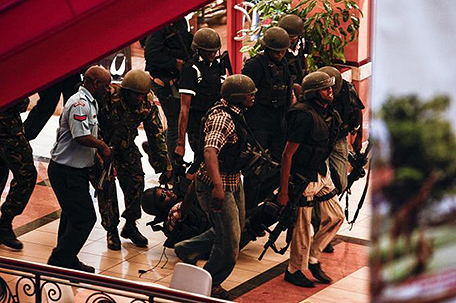 ABOVE PHOTO:  Officials help carry an injured man inside the Westgate shopping mall after a shootout in Nairobi, Kenya, September 21, 2013.   (EPA/KABIR DHANJI)

Told from the vantage point of more than 100 security cameras revealing hours of previously unseen mall surveillance video, and drawing on extensive photos taken during the attack and testimony from survivors and rescuers depicted in the footage and photos, the documentary ‘Terror at the Mall’ recalls the horror of the attack, as well as the courage and resilience of ordinary citizens in the face of mass murder. The harrowing documentary premiered on Monday, Sept. 15 on HBO, marking the first anniversary of the attack. Dan Reed (HBO’s Emmy-nominated “Terror in Mumbai”) directed.

“Westgate was one place where you meet people of different cultures, different tribes, different religions, different everything. I think that was the most special thing,” says survivor Jasmine Postwalla. Housing many restaurants and stores, including Nakumatt, a giant two-floor supermarket, Westgate attracted a wide range of customers. “It was the best mall in Nairobi,” notes one shopper. “It was the place where prominent people come.”

“That Saturday was really a normal Saturday, like any other Saturday,” recalls survivor Amber Prior, who was shopping at the mall with her 6 year-old daughter and 4 year-old son. Margie Brand and her 8 month-old baby shopped for groceries in Nakumatt, while Valentine Kadzo was setting up a computer display table by the front entrance.

At 12:30 p.m., shopper Andrew Munyua had just passed through the security check to enter the mall when he heard a loud explosion, and the guard who had been searching him fell to the ground. Witnesses recall that gunfire quickly followed the grenade explosion. Security footage shows restaurant patrons falling from their seats, some diving for cover, while others had been knocked to the ground. Niall Saville and his wife, Moon Hee, were eating lunch in Westgate’s burger restaurant when the attack began. “I realized that my wife wasn’t actually behind me,” recalls Saville. “I saw her crawling on the ground, clearly in a lot of pain.”

Chaos reigned in the early moments of the siege, with frightened shoppers running for their lives, unsure of the origin of the attack. “People are confused, they don’t know where to go, stepping on each other,” recalls Valentine. As the security footage shows, when she spotted Katherine Walton and her three young daughters running in different directions, she picked up one of the girls, and all five dove behind the computer display table. Many hid within the mall, while hundreds of shoppers fled to the back of the supermarket.

As two of the gunmen made their way toward Nakumatt, two others headed for the mall’s upper entrance and rooftop, where a children’s cooking competition was taking place. Harveen Sihra, a 15-year-old girl who was shot in the thigh, stomach and foot, recalls the gunman’s words, noting, “The only thing he said was that we are here to kill. You killed our people in Somalia. We normally don’t kill women and children but you kill ours in Somalia and so we are here to take revenge.”

Inside Nakumatt, 20 people had taken refuge behind the meat counter when the gunmen appeared and starting shooting them. Amber, who was protecting her young son and daughter, was shot through the pelvis. Also hit was 15-year-old Makena Kinyua. When the terrorists later asked if there were any children left alive, Amber convinced them to release her children along with Makena and another young boy who had been injured. Ignoring the fact that the gunmen told her she had to stay, Amber and the four children staggered out of the mall to safety.

Outside the mall, 45 minutes after the attack began, there still was no sign of a rescue. While the Kenyan security forces remained outside trying to decide how to proceed, time was running out for the wounded. “We laid there for a very long time,” recalls Jasmine Postwalla, who was trapped on the upper level. “You would expect to see a lot of armed soldiers and all coming up the ramp. Maybe that was what we were expecting, but that didn’t happen.”

Within the mall, a shootout began between the terrorists and the small group of civilian rescuers and plainclothes policemen. The display table hiding Valentine, Katherine and her daughters, as well as two other women, was caught in the crossfire. “It was instantaneous fear and just dread,” says Katherine. By engaging the terrorists at Nakumatt’s front entrance, the band of rescuers helped more than a hundred trapped civilians escape. Using tear gas, the policemen and civilians were able to divert the terrorists, giving many hidden shoppers the chance to run to safety “Everybody’s close to each other. We don’t know each other, we all come from different communities. But at that time, we were one,” recalls Valentine.

Three and a half hours after the terrorists first struck, the police SWAT team finally entered the mall, but by then the massacre was over and many of the wounded had succumbed to their injuries. Confused and lacking a comprehensive plan, the Kenyan army forces and the SWAT team mistakenly fired at each other, leaving one police officer dead. As a result, both groups left the mall just 90 minutes after they’d arrived. Meanwhile, the terrorists relaxed at the back of Nakumatt’s furniture storeroom, praying and waiting to be attacked by Kenyan forces.

The last group of civilians was rescued more than eight hours after the attack began. The standoff between the terrorists and the Kenyan army lasted 40 more hours, during which five soldiers were killed. Two days after the terrorists struck, the army launched a high explosive shell into Nakumatt. All four terrorists were incinerated, and parts of Westgate Mall burned to the ground.