Ten books on Black culture, because why wait for Black History Month? 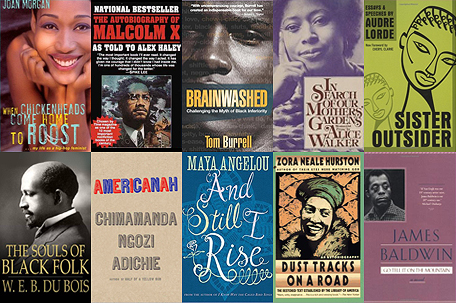 Black history and culture is one thing that unites Black people across the globe. It gives us a chance to find commonality and solidarity in a world where we face similar struggles. There’s a lot that can be learned from literature that reflects Black lives and identity, not only about Black history, but how it affects our lives to this day.

Fictional Black literature also sparks a connection between writer and reader in terms of identifying with characters and stories. Check out these 10 books on Black culture. If you’re interested in reading more books concerning black culture, make sure to have your library card ready!

This story chronicles the lives of a Nigerian couple after they both leave their native land for America and London. “Americanah” also sheds light on what it’s like to grow up in Nigeria, then transition into learning American customs and culture. In 2013, this book won the National Book Critics Circle Award for Fiction.

“Go Tell It on the Mountain” by James Baldwin

This novel is the semi-autobiographical account of author James Baldwin’s life. It follows the life of a 14-year-old boy and his life as the stepson of a church minister. Themes of sexuality and coming of age are explored through this novel, which was published in 1953.

“Dust Tracks on a Road” by Zora Neale Hurston

This autobiography follows the life of Zora Neale Hurston, a Harlem Renaissance author famous for writing novels and short stories related to Black culture, including “Their Eyes Were Watching God.” Hurston’s childhood roots in rural Alabama leading to her adulthood are shown in this novel, first published in 1942– as well as her life as a Black woman who found a voice through writing.

“And Still I Rise” by Maya Angelou

Maya Angelou wore many hats as a poet, activist, and writer. She wrote on a number of topics concerning her life as a black woman and what comes with that identity. This can be found in her autobiography as well as her poems. “Phenomenal Woman,” “Still I Rise”, and other triumphant poems are included in her 1978 book of poems, “And Still I Rise.”

“The Autobiography of Malcolm X” by Alex Haley and Malcolm X

Malcolm X was a prolific fighter and orator against racism and discrimination against Black people. But before Malcolm discovered who he was and was meant to be, he faced a lot of hardships. This autobiography showed how Malcolm became a leader through personal experiences and chance encounters with others who influenced him.

One of W.E.B. Du Bois’ best known written accomplishments, outside of co-founding the NAACP’s first magazine, “The Souls of Black Folk” holds its place in Black literature as being both relevant and valuable. In this book, Du Bois analyzes how slavery and the ensuing racism and Jim Crow laws have had an affect on African-Americans.

“In Search of Our Mothers’ Gardens” by Alice Walker: Womanist Prose

Alice Walker is an author that has spoken on many topics concerning the identity of Black women, including in her award-winning novel, “The Color Purple.” “In Search of Our Mother’s Gardens” by Alice Walker is where the term “womanism” was coined, which is the women of color’s response to mainstream feminism. In this novel, Walker brought together several essays ranging on topics from Black womanism to human rights struggles faced in America.

“Brainwashed: Challenging the Myth of Black Inferiority” by Tom Burrell

Written by advertising agent and author Tom Burrell, “Brainwashed” is a book centered around the fact that Black people have faced oppression for centuries and have been told that they are inferior to white people. The book also goes into depth on how this is portrayed in various media outlets. “Brainwashed” is meant to provoke thought and a change in society that still shows Black people in a negative light. This is a topic that is similar to W.E.B. Du Bois’ “The Soul of Black Folk”, in that it casts a light on the shadowing of Black struggles, many of which go unnoticed.

“When Chickenheads Come Home to Roost” by Joan Morgan

Accompanied with the tagline, “A Hip Hop Feminist Breaks It Down,” this book by Joan Morgan offers a modern look at the liberated Black woman and what dating, work and other aspects of life seen like through her eyes. Morgan also coined the term “hip-hop feminism” in this 1999 book, which became her most famous work.

Audre Lorde has been a long time activist against racism, sexism and homophobia. In her writings, she chose poems and novels as a way of getting her thoughts out to the world. “Sister Outsider” contains a collection of Lorde’s essays and speeches surrounding and addressing discrimination against Black people, lesbians, and women.