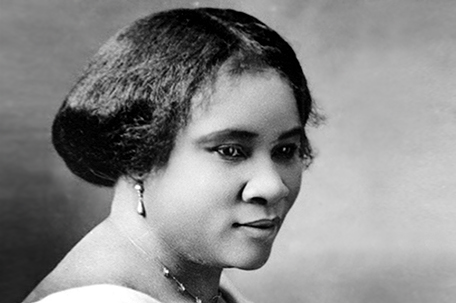 Sarah Breedlove (December 23, 1867 – May 25, 1919), known as Madam C. J. Walker, was an American entrepreneur, philanthropist, and the first female self-made millionaire in America. She made her fortune by developing and marketing a line of beauty and hair products for black women under the company she founded, Madame C.J. Walker Manufacturing Company.

Breedlove was born on December 23, 1867, near Delta, Louisiana, to Owen and Minerva (Anderson) Breedlove. Sarah was one of six children, which included an older sister, Louvenia, and four brothers: Alexander, James, Solomon, and Owen Jr. Breedlove’s parents and her older siblings were enslaved on Robert W. Burney’s Madison Parish plantation, but Sarah was the first child in her family born into freedom after the Emancipation Proclamation was signed. Her mother died, possibly from cholera, in 1872; her father remarried, but he died within a few years. Orphaned at the age of seven, Sarah moved to Vicksburg, Mississippi, at the age of ten and worked as a domestic. Prior to her first marriage, she lived with her older sister, Louvenia, and brother-in-law, Jesse Powell.

In 1882, at the age of fourteen, Sarah married Moses McWilliams, possibly to escape mistreatment from her brother-in-law. Sarah and Moses had one daughter, Lelia McWilliams, born on June 6, 1885. When Moses died in 1887, Sarah was twenty; Lelia was two years old.Sarah remarried in 1894, but left her second husband, John Davis, around 1903 and moved to Denver, Colorado, in 1905.

In January 1906, Sarah married Charles Joseph Walker, a newspaper advertising salesman she had known in Missouri. Through this marriage, she become known as Madam C. J. Walker. The couple divorced in 1912; Charles died in 1926. Lelia McWilliams adopted her stepfather’s surname and became known as A’Lelia Walker.

In 1888 Sarah and her daughter moved to Saint Louis, Missouri, where three of her brothers lived. Sarah found work as a laundress, barely earning more than a dollar a day, but she was determined to make enough money to provide her daughter with a formal education.During the 1880s, Breedlove lived in a community where ragtime music was developed—she sang at the St. Paul African Methodist Episcopal Church and started to yearn for an educated life as she watched the community of women at her church. As was common among black women of her era, Sarah experienced severe dandruff and other scalp ailments, including baldness, due to skin disorders and the application of harsh products such as lye that were included in soaps to cleanse hair and wash clothes. Other contributing factors to her hair loss included poor diet, illnesses, and infrequent bathing and hair washing during a time when most Americans lacked indoor plumbing, central heating and electricity.

Initially, Sarah learned about hair care from her brothers, who were barbers in Saint Louis. Around the time of the Louisiana Purchase Exposition (World’s Fair at St. Louis in 1904), she became a commission agent selling products for Annie Turnbo Malone, an African American hair-care entrepreneur and owner of the Poro Company. While working for Malone, who would later become Walker’s largest rival in the hair-care industry, Sarah began to adapt her knowledge of hair and hair products to develop her own product line

In July 1905, when she was thirty-seven years old, Sarah and her daughter moved to Denver, Colorado, where she continued to sell products for Malone and develop her own hair-care business. Following her marriage to Charles Walker in 1906, she became known as Madam C. J. Walker and marketed herself as an independent hairdresser and retailer of cosmetic creams. (“Madam” was adopted from women pioneers of the French beauty industry.) Her husband, who was also her business partner, provided advice on advertising and promotion; Sarah sold her products door to door, teaching other black women how to groom and style their hair.

In 1906, Walker put her daughter in charge of the mail order operation in Denver while she and her husband traveled throughout the southern and eastern United States to expand the business. In 1908 Walker and her husband relocated to Pittsburgh, Pennsylvania, where they opened a beauty parlor and established Lelia College to train “hair culturists.” After closing the business in Denver in 1907, A’lelia ran the day-to-day operations from Pittsburgh, while Walker established a new base in Indianapolis in 1910. A’lelia also persuaded her mother to establish an office and beauty salon in New York City’s Harlem neighborhood in 1913.

In 1910 Walker relocated her business to Indianapolis, where she established the headquarters for the Madame C. J. Walker Manufacturing Company. She initially purchased a house and factory at 640 North West Street. Walker later built a factory, hair salon, and beauty school to train her sales agents, and added a laboratory to help with research. She also assembled a competent staff that included Freeman Ransom, Robert Lee Brokenburr, Alice Kelly, and Marjorie Stewart Joyner, among others, to assist in managing the growing company. Many of her company’s employees, including those in key management and staff positions, were women.

Between 1911 an 1919, during the height of her career, Walker and her company employed several thousand women as sales agents for its products. By 1917 the company claimed to have trained nearly 20,000 women. Dressed in a characteristic uniform of white shirts and black skirts and carrying black satchels, they visited houses around the United States and in the Caribbean offering Walker’s hair pomade and other products packaged in tin containers carrying her image. Walker understood the power of advertising and brand awareness. Heavy advertising, primarily in African American newspapers and magazines, in addition to Walker’s frequent travels to promote her products, helped make Walker and her products well known in the United States. Walker became even more widely by the 1920s as her business market expanded beyond the United States to Cuba, Jamaica, Haiti, Panama, and Costa Rica.

In addition to training in sales and grooming, Walker showed other black women how to budget, build their own businesses, and encouraged them to become financially independent. In 1917, inspired by the model of the National Association of Colored Women, Walker began organizing her sales agents into state and local clubs. The result was the establishment of the National Beauty Culturists and Benevolent Association of Madam C. J. Walker Agents (predecessor to the Madam C. J. Walker Beauty Culturists Union of America). Its first annual conference convened in Philadelphia during the summer of 1917 with 200 attendees. The conference is believed to have been among the first national gatherings of women entrepreneurs to discuss business and commerce. During the convention Walker gave prizes to women who had sold the most products and brought in the most new sales agents. She also rewarded those who made the largest contributions to charities in their communities.

Walker became more involved in political matters after her move to New York. She delivered lectures on political, economic, and social issues at conventions sponsored by powerful black institutions. Her friends and associates included Booker T. Washington, Mary McLeod Bethune, and W. E. B. Du Bois, among others. During World War I Walker was a leader in the Circle For Negro War Relief and advocated for the establishment of a training camp for black army officers. In 1917 she joined the executive committee of New York chapter of the National Association for the Advancement of Colored People (NAACP), which organized the Silent Protest Parade on New York City’s Fifth Avenue. The public demonstration drew more than 8,000 African Americans to protest a riot in East Saint Louis that killed thirty-nine African Americans.

At the time of her death Walker was considered to be the wealthiest African American woman in America. She was eulogized as the first female self-made millionaire in America, but Walker’s estate was only worth an estimated $600,000 (approximately $8 million in present-day dollars) upon her death. According to Walker’s New York Times obituary, “she said herself two years ago [in 1917] that she was not yet a millionaire, but hoped to be some time.” Her daughter, A’Lelia Walker, became the president of the Madame C.J. Walker Manufacturing Company.