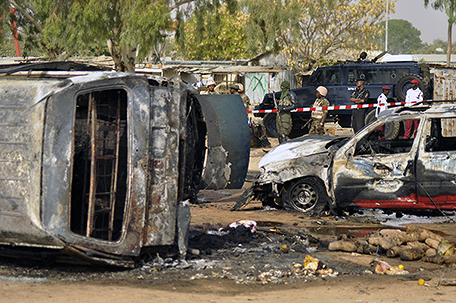 By Adamu Adamu and Ibrahim Garba

In an apparently unrelated development, an American missionary has been kidnapped from a school in central Kogi state. The Rev. Phyllis Sortor was taken away Monday by several abductors, according to a statement on the website of the Free Methodist Church in Seattle. Kidnappings for ransom are common in Nigeria, and many victims are returned unharmed.

In the northeastern town of Potiskum, a young man forced his way onto a bus and detonated explosives that killed 12 people and injured 20, according to the bus driver and hospital records.

Hours later, two young men were blamed for explosions that ripped through a bus station in northern Kano city, killing at least 12 people and injuring many more, according to state police commissioner Ibrahim Idris. Witnesses said the bombers appeared to be 17 or 18 years old.

The explosions triggered fires that destroyed two buses and a car, Idris said.

Firefighters rushed to the scene of twisted metal, wailing people and billowing smoke. Ambulances with sirens blaring carried bodies and the wounded to the hospitals in Kano, Nigeria’s second largest city.

The attack in Potiskum came two days after a girl who looked about 10 years old carried explosives that detonated, killing her and four others at a market in the same town.

Bus driver Adamu Isa said a security guard stopped a man who set off a metal detector as passengers were boarding his bus in Potiskum.

“He was told to stand to one side but instead forced himself onto the bus and blew himself up,’’ said Isa, who considered himself lucky to be alive.

There was no immediate claim of responsibility for Tuesday’s blasts but they bear all the signs of similar attacks by Nigeria’s home-grown Boko Haram Islamic extremist group.

On Monday, a woman walked into a primary school in Fune, another area of Yobe state, and tried to give pupils a parcel to deliver to the headmistress. When they refused, she ran off, leading security agents to surmise she may have been carrying a bomb, teacher Mohammad Isa of Damagum Central Primary School told The Associated Press.

All schools in the area have been closed because of the possible threat.

Boko Haram is a nickname meaning “Western education is forbidden’’ in the local Hausa language and the extremists have perpetrated numerous attacks on schools and students.

Nigeria’s President Goodluck Jonathan commiserated with families of the victims and condemned the extremists for choosing soft targets.

A presidential statement said recent victories by Nigerian troops who have retaken a dozen towns from Boko Haram show “the tide has now turned.’’

Attacks by girls and young women have raised fears that Boko Haram is using some of its hundreds of kidnap victims to carry out bombings. It is unclear if children are detonating explosives, if the blasts are remotely controlled, and if the children understand what is happening.

At least 10,000 people have been killed in Nigeria’s Islamic uprising in the past year, according to the Council on Foreign Affairs, and some 1.6 million people have been driven from their homes in the campaign to enforce strict Islamic law across Nigeria, whose 160 million people are divided almost equally between Muslims and Christians.