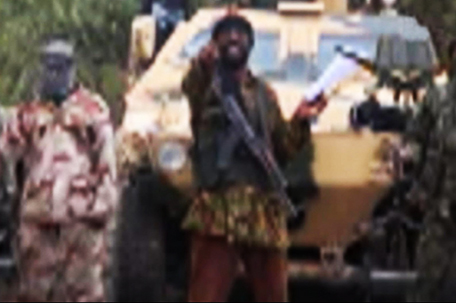 By Adamu Adamu and Michelle Faul

POTISKUM, Nigeria — A suicide bomber disguised in a school uniform detonated explosives at a high school assembly in the northeastern Nigerian city of Potiskum on Monday, killing at least 48 students, according to survivors and a morgue attendant.

Soldiers rushed to the scene, grisly with body parts, in the capital of Yobe state, but they were chased away by a crowd throwing stones and shouting that they are angry at the military’s inability to halt a 5-year-old Islamic insurgency that has killed thousands and driven hundreds of thousands from their homes.

A suicide bomb attack in the same city killed 30 people one week ago, when suspected Boko Haram fighters attacked a religious procession of moderate Muslims.

Some 2,000 students had gathered for Monday morning’s weekly assembly at the Government Technical Science College when the explosion blasted through the school hall, according to survivors.

“We were waiting for the principal to address us, around 7:30 AM, when we heard a deafening sound and I was blown off my feet, people started screaming and running, I saw blood all over my body,” 17-year-old student Musa Ibrahim Yahaya said from the general hospital, where he was being treated for head wounds.

Hospital records show 79 students were admitted and health workers said they include serious injuries that may require amputations. The hospital was so overcrowded that some patients were squashed two to a bed.

A morgue attendant said 48 bodies were brought to the hospital and all appeared to be between the ages of 11 and 20 years old. He spoke on condition of anonymity because he is not authorized to give information to reporters.

Survivors said the bomber appeared to have hidden the explosives in a type of rucksack popular with students. Months ago Nigeria’s military had reported finding a bomb factory where explosives were being sewn into rucksacks in the northern city of Kano.

Garba Alhaji, father of one of the wounded students, said the school did not have proper security. “I strongly blame the Yobe state government for not fencing the college,” he said, adding that just three months ago a bomb was discovered in the school and removed by an anti-bomb squad.

The federal government of President Goodluck Jonathan, who is running for re-election in February, also had promised more security for schools in the northeast.

Boko Haram— the name means “Education is sinful” in the local Hausa language — attracted international outrage with the April kidnappings of 276 mostly Christian schoolgirls writing exams at a northeastern boarding school. Dozens escaped on their own but 219 remain missing. Boko Haram has said that the schoolgirls have all converted to Islam and been married off to extremist fighters.

Many Nigerians are angry that Boko Haram has increased attacks and bombings since Oct. 17 when the government claimed to have brokered a cease-fire. Boko Haram leader Abubakar Shekau has denied negotiating a truce.