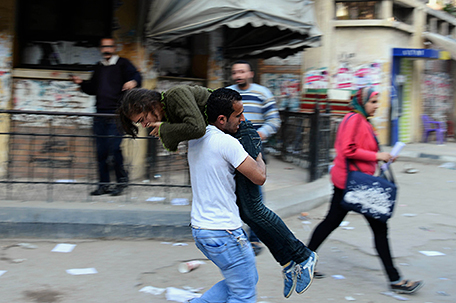 ABOVE PHOTO:  An Alexandria University student carries another student out of the school as she was injured during clashes between student protesters and the Egyptian security forces in Alexandria, Egypt, Wednesday, March 26, 2014. Hundreds of largely Islamist university students in a number of universities protested Wednesday against the mass death sentences issued against more than 520 suspected supporters of President Mohammed Morsi in a cursory trial, setting off clashes that left dozens injured.   (AP Photo/Heba Khamis)

CAIRO — Hundreds of largely Islamist university students in a number of universities protested Wednesday against the mass death sentences issued against more than 520 suspected supporters of President Mohammed Morsi in a cursory trial, setting off clashes that left dozens injured.

At Cairo University, hundreds of students who attempted to take their protest outside the campus were met with volleys of tear gas from police. Khadiga el-Kholy, a student participating in the protest, said the police force gave no warnings before firing the tear gas, sending the students rushing back on campus.

Students responded by throwing stones and fireworks and hurling tear gas canisters back at the security forces in pitched street battles. TV footage showed security in civilian clothes detaining protesters and taking them away in blindfolds. There were also images of the security seizing fire bombs from young protesters. El-Kholy said police fired birdshot at the protesters.

A pro-Morsi student group called for the protests, and students from various university departments as well as high school students responded, el-Kholy said.

“We wanted to escalate our protest because of those death sentences, which included university students,” she said, adding that the protesters had sought to move into a nearby public square outside the campus. “We want to break the barriers that the security forces have imposed on all the squares.”

In the Nile Delta city of Zagazig, police said students damaged the facade of an administrative building in the local university and clashed with rival students, prompting to security forces to enter the campus and arrest eight rioters.

On Monday, a court in the city of Minya sentenced more than 520 Islamists to death in connection to an attack on a police station last year that killed a police officer. The verdicts came after a trial that held only two sessions in which the defense was not allowed to present its case. It is not known how many university students are among those sentenced.

The mass death sentences caused an international outcry. Thousands of Morsi supporters are already arrested and most are facing trials on a number of charges, including inciting violence, and rioting.

Morsi’s Islamist supporters have continued to hold protests against his ouster. Authorities accuse the group of fomenting violence and terrorism, a claim the group denies.

The pro-Morsi camp has refused to recognize the new political road map installed by the military after his ouster. Presidential elections are now expected next month and the country’s military chief is widely expected to run and win.