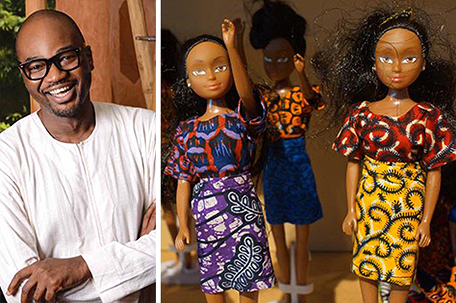 ABOVE PHOTO:  Taofick Okoya, founder of Queens of Africa dolls

“Queens of Africa” is Nigeria’s first major line of fashion dolls created by local entrepreneur, Taofick Okoya. The company is so successful that they sell around 9,000 dolls each month.

When Okoya started his company back in 2011, it was a slow beginning. It didn’t catch on in Nigeria as quickly as he would have liked. There was a greater demand with international audiences, so Okoya knew he had to increase production in order to export. He keeps a basic staff of 15 to cover normal orders, but increases his staff when needed to 50 in order to accommodate larger orders.

More than just a doll

The dolls are literally called ‘Queens of Africa’ and ‘Naija Princesses’, and the uniqueness of the toys is the social impact they have on children. It was Okoya’s goal to create a product that had a sense of value and a positive impact on African children. The dolls teach them pride in their culture. Okoya considers himself a social entrepreneur because his dolls are not about the money but the way it impacts lives.

Okoya made the dolls affordable so he could sell them to low-income people. That was important to him. His future goal is to expand worldwide and sell the dolls not only in Nigeria and Africa but internationally. He believes the dolls will continue to have a positive psychological impact on children around the world.

The ‘Queens of Africa’ dolls, his premier line, are named after distinct Nigerian tribes. They include Nneka (Igbo), Azeezah (Hausa) and Wuraola (Yoruba). The ‘Naija Princesses’ include Chinyere, Aisha, and Temilola.

For more details and/or to purchase a doll, visit www.queensofafricadolls.com/ or follow them on Facebook at www.facebook.com/queensofafricablackdolls