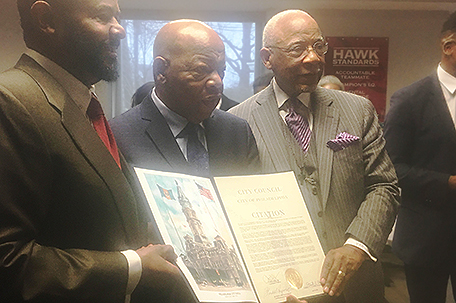 Congressman John Lewis reminded the students of St. Joseph University that while we’ve accomplished much in terms of the Rev. Dr. Martin Luther King Jr.’s dream, there are miles to go before we sleep.

To change things for the better in America and around the world, one has to be willing to make trouble.

From the moment that he heard the Rev. Dr. Martin Luther King speak on the radio, a young John Lewis has been inspired to make trouble on behalf of righteousness, something his parents weren’t necessarily on board with.

“I saw signs that said, ‘White Men’, ‘Black Men’, ‘White Waiting’ and ‘Black Waiting’,” Lewis said. “I asked my parents why, and my parents said ‘That’s just the way it is! Don’t get in the way!’ But hearing Dr. King on the radio inspired me to find a way to get in the way. I got into good trouble. Necessary trouble. To get in the way…” “…and I’ve been getting in the way ever since.”

Congressman John Lewis shared that story with a group of students from Saint Joseph’s University on Monday as part of the University’s yearlong celebration of the anniversary of King’s 1967 appearance there. Lewis was also awarded the school’s Presidential Medal of Excellence at the event.

Lewis, who has represented Georgia’s 5th Congressional district since 1987, talked about his time as chair of the Student Nonviolent Coordinating Committee (SNCC) and as one of the organizers of the March on Washington with King, how it continues to shape him today, and the importance of everyone being willing to get into “good trouble.”

“Today, all across America, young people, students, religious leaders, women are getting in trouble,” he said. “My philosophy is very simple. If you see something that is not right, not fair, not just, you have a moral obligation to stand up, to say something, to do something and not be quiet.

But, getting into “good trouble” isn’t without inconveniences like, for example, getting arrested. Lewis recounted his first arrest on behalf of social justice and how he got prepared for it.

Before entering Congress, Lewis was arrested 40 times in the name of social justice. He was arrested another five while in Congress, most recently in 2013 as part of a rally calling for comprehensive immigration reform.

His belief in justice demanded it, he said.

“We have hundreds of thousands of “Dreamers”,” he said. “It’s not fair and it’s not right for so many of these young people to be in the shadows and living in fear. We need comprehensive immigration reform. It’s the right thing to do.”

It is his ability to modernize the Civil Rights Movement for university students which made bringing Lewis to campus so important, said Monica Nixon, assistant provost for diversity and inclusion at Saint Joseph’s.

By including immigration reform in his remarks, Lewis reminded the students that the fight for civil rights is a constant one, Nixon said.

While the outward signs of Jim Crow are no longer with us, the attitudes and privilege that made those laws possible still are, Lewis said.

Because of this, it’s more important for everyone to make as much “good trouble” as possible, he said.

“King gave us the courage to stand up, to be courageous, to be bold,” he said. “Never give up, never lose faith, and we will get there. We will create the Beloved Community.”